Enter, James Scott Bell.  Again.  Last week, I talked about OP vs NOP.  This week, I'll borrow some more advice from Bell in his book "Plot & Structure".  This time, it's about developing your character and making us (the reader) care.

And you do that with the beat.

Scott defines a Scene as "a long unit of time and action."  In The Wizard of Oz, Dorothy meets the Lion.
A Beat is "a smaller unit in a scene."  Dorothy slaps the Lion and we learn something about them both (the Lion is a coward, Dorothy is braver than we'd thought). 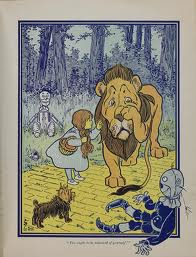 Scenes are important because it furthers your plot.  It has action and intrigue.  Hypothetically speaking, a story can consist of only scenes.  This happens, that happens.  The End.  Yaaaay.  But it would be pretty boring.

Enter, the Beat.  There is also what Bell calls "the Reaction Beat."  This lets us know how the main character is feeling.  The Lion cries and whines.  Reaction.  Dorothy softens and wipes his tears.  Reaction.

By mixing these elements in your writing (action, beat, action, reaction, action, etc, etc), you have suddenly created a dynamic plot with a character the reader can understand.  It also helps pull the reader in.  Without the beats, it's only heartless action.  "Henry slapped Jessica and walked away."  Without action, it's only feelings (yuck).  "Jessica felt the sting of betrayal yet again, though it wouldn't be the last time."  Put them together, "Henry slapped Jessica.  Her cheek strung with the betrayal she had hoped to never feel again.  But it wouldn't be the last time.  "F you, Henry!" she shouted as he walked away."  (amatuer writer at the helm here, hope I don't lead you astray.)  You get the picture.

So, as you're writing your novel, don't forget about your character in that delicious plot you're cooking up.  And don't forget to add a little action to your character's angst.  If any of your readers say "I don't feel like I know your main character" (I've heard that one myself), try mixing in a few more beats.  You might have too much action.  If your readers complain about not seeing enough scenery and action... guess what?  Probably too much dialogue and internal contemplation.  AKA too many beats.  You need something for the character to react to after all.

We're about the middle of NaNoWriMo now, don't lose sight of your goal writers!

Happy writing!
Posted by Vickie Motter at 8:41 AM

I feel like slapping my forehead! Beats, of course! So simple, yet it is something I'm certain I've overlooked. I love it. Thank you, this has helped me a lot.