And Then Things Fall Apart by Arlaina Tibensky is the epitome of great voice. 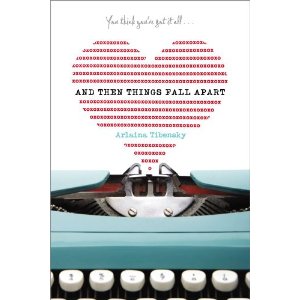 Keek and her boyfriend just had their Worst Fight Ever, her best friend heinously betrayed her, her parents are divorcing, and her mom’s across the country caring for her newborn cousin, who may or may not make it home from the hospital. To top it all off, Keek’s got the plague. (Well, the chicken pox.) Now she’s holed up at her grandmother’s technologically-barren house until further notice. Not quite the summer vacation Keek had in mind.
With only an old typewriter and Sylvia Plath’s The Bell Jar for solace and guidance, Keek’s alone with her swirling thoughts. But one thing’s clear through her feverish haze—she’s got to figure out why things went wrong so she can put them right.

First Sentence: "I once watched a collector kill a monarch butterfly on a nature show by putting it under a glass dome with a piece of cotton soaked in gasoline." Is that gripping enough for you? The beauty of this first line and its metaphor, is that she doesn't dwell on it throughout the book. She moves on to other things but the line served its purpose, both to catch our attention and set up Keek's voice.

Brownie Points: Tibensky managed to make me interested in Sylvia Plath (not enough to read Sylvia Plath) but she examines The Bell Jar in such a way that is neither dry nor boring. Also, I already said above, but this book has the most captivating voice. I love her witty, smart humor with touches of self pity and realism.

Recommendation: If for nothing else, you must read for voice. But also read it because it is a smart, sexy read, and I think you'll be pleasantly surprised by how much you'll love it and Keek.

Would I represent it? You know, if this had showed up in my slush pile, I would have rejected it. Most likely, the amount of voice and plot (no one dies! haha) would have scared me off, thought it was too much of a risk. And the voice is a bit younger than I normally acquire. Actually, I probably wouldn't have picked it up off the shelf if it hadn't been recommended to me, but I'm so glad it was because I loved every page.

I've been hearing wonderful things about this book, but I wasn't quite sure it was for me. Now, I'm thinking it is. I love books with a great, stand-out voice. Thanks for the review! :)

I'm curious as to why you would have rejected it. In what way isn't it for you?

Huh. It's interesting to see the comment about voice and nobody dying. As my husband put it, capping a few mo' fo's in a book isn't so hard.

This sounds really good. Thanks for the recommendation!

You say you would have rejected it based on voice and plot. Then you read it and loved it, particularly for the voice. Looking back, do you think this would change the way you would look at submissions in the future as the goal is to represent books you love that you can also sell. This book filled both those criteria in the end and yet... Curious as to how agents may change and develop their acceptance criteria based on experience, both successful experiences and not so successful ones. Thanks.