I have a very special Wednesday Reads for you guys. And a little story to go with.

Every so often, an agent finds a manuscript that is remarkable. That, every time you read it, you fall in love with it all over again. That, when you tell people about it, you get excited and bouncy and scare people away. That the mere thought of other people not falling in love with it breaks your heart.

I actually found this when I was an intern. I believe I had requested a hundred pages and when I got to the end I didn't wait, couldn't wait, and I asked for the full ms immediately. It was one of those that I was constantly refreshing my email wanting to read it. If not for that little break, I read it in one sitting. I immediately sent it off to Andrea (my boss, come on guys, keep up!) and she read it in one sitting (at night, lost sleep--for more than one reason).

So we worked with Amber to polish, beautify, and make it more profound, scarier (even though it already was all of those things!). Then we started to pitch it to editors. This went on even as I began my own journey as an agent. 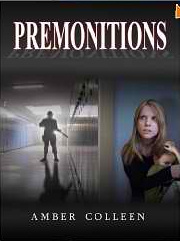 Alas, earlier this year, we had to concede a minor defeat: editors just didn't know where to place it. Where does one put a Die Hard from a mother's perspective trying to protect her children? So we encouraged Amber to self publish it because the idea of it not ending up in readers' hands was devastating.

Catch up with Amber on her author page here, buy it from Amazon here, and follow her on Twitter @amber_colleen. With no further ado, my utterly biased and very enthusiastic review of Premonitions by Amber Colleen.


This is NOT a story about a parent’s worst nightmare.

Nightmares you wake up from...

How far would you go to save the ones you love?

When unspeakable violence threatens a secluded North Carolina town, suburban mother, Mallory Carpenter, must ask herself this very question. For years, she has attempted to escape the darkness of her past by devoting herself to her beloved children. But this peace is shattered when a terrifying group of masked gunmen on a deadly mission invades an elementary school full of innocent children. Soon the school is under lockdown, and the children, parents, and staff are firmly held hostage with no chance of escape.

Cut off from the outside world, Mallory manages to uncover the unbelievable connection between the intruders, the tragic murder of a renowned scientist and his family, and a strange young boy who does not speak. She realizes, too late, her little world was never as safe as she thought it was.

Mallory is forced to confront the twisted past she thought she left behind and use her wits to fight for her life and the lives of others around her. She and the children must band together to defend what is theirs in this gripping psychological thriller debut from author Amber Colleen that will keep readers turning page after page, hoping against hope that everyone will make it out alive.


First Line: (from the prologue) "Crouched here on the cold title in a puddle of blood, I think about the thousands of tiny decisions that brought me here: to this day, to this place, to this moment." The journey Mallory takes is as much an emotional one as one of action and danger and split second decisions. Right here we're seeing into her mind at a crucial moment that will come up again in the book.

(From chapter one) "This typical school day morning, my big challenge is footsteps. Little six-year-old footsteps clad in lavender socks, moving at the speed of still water." Chapter one brings us to the beginning of Mallory's day, which is very suburban, very normal. Any mother can identify with Mallory. I love the levity of this passage, the "woe is me and my challenges as a mother that I absolutely love and can't live without." I'm not a mother myself, but I identify with Mallory 100% anyways. She's just that likable and relatable a character.

Brownie Points: How many am I allowed? Because there isn't one part of it that I like more than the others. I've already said how much I like Mallory. You'll have to read to figure it out yourself. But my other brownie point has to go to the sheer terror going on in this novel. It's so real, so tangible, the love of a mother for her children, the courage of a group of people, no matter their age, trapped together in a nightmare. And of course, there is one thing, one awesome AH! moment that you'll know when you read it. I can't even hint. Can't.

Beefs: This is not a bedtime reading book. One, it might give you some pretty interesting dreams. Two, you might not sleep at all because you need to read it all at once. No matter how many times I read this, I always block out a few hours from my day to get it done, because I know from experience I can't leave it in the middle.

Recommendation: It's the sort of book that will appeal to all sorts of people. It has love (general, non romantic love), action, a beautiful character arch, children that will steal your heart, evil villains that will speed your heart. Seriously, read it. And I realize I might have emphasized the nightmare terror point above, it's not that scary, so accessible to anyone.

Represent: There really is no telling what I'll fall in love with. Would I represent something like it again? Perhaps. I'd have to read and see. I'll be more inclined for something heavier on the romance. But for just a straight women's thriller, Andrea would be the person to go to for that. But I am hella glad I plucked this one out of the slush pile.

Happy reading!
Posted by Vickie Motter at 8:00 AM

This sounds amazing, Vickie! I tend to steer away from kids-in-peril books, but you've got me itching to read it. I do love a good thriller!

DIE HARD from a mother's perspective? I'm totally in.