Months and months ago, I reviewed The Body Finder by Kimberly Derting. No one read my post and it was formatted horribly (one of my first Wednesday Reads). So, because I just read book 2: Desires of the Dead, I'm going to reformat and repost.

I'm not reviewing Desires of the Dead because I prefer to review only the first book in a series. But know this: it was AMAZING! 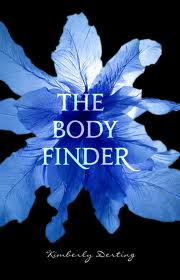 Violet Ambrose is grappling with two major issues: Jay Heaton and her morbid secret ability. While the sixteen-year-old is confused by her new feelings for her best friend since childhood, she is more disturbed by her "power" to sense dead bodies—or at least those that have been murdered. Since she was a little girl, she has felt the echoes that the dead leave behind in the world... and the imprints that attach to their killers.

Violet has never considered her strange talent to be a gift; it mostly just led her to find the dead birds her cat had tired of playing with. But now that a serial killer has begun terrorizing her small town, and the echoes of the local girls he's claimed haunt her daily, she realizes she might be the only person who can stop him.

Despite his fierce protectiveness over her, Jay reluctantly agrees to help Violet on her quest to find the murderer—and Violet is unnerved to find herself hoping that Jay's intentions are much more than friendly. But even as she's falling intensely in love, Violet is getting closer and closer to discovering a killer... and becoming his prey herself.

First Line: "Violet Ambrose wandered away from the safety of her father as she listened to the harmony of sounds weaving delicately around her." Who doesn't want to keep reading? Bueller?

Beefs: The only problem I had with it, was the lack of personal characteristics. Chapter 1 we learn that Violet has curly hair and she wishes she had super straight hair like every other girl in school. It's a great insight into her as a character; wishing she were normal in more ways than one. And everyone can identify with her (who doesn't wish their hair were different?).  But that's all we learn about what she looks like  until nearly the end when she comes to term for a moment with her hair and we learn she has green eyes. This is my only complaint for the entire book, and it's more like a nit-pick than a complaint. All the other visuals and sensory details completely make up for it. 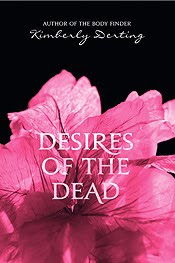 Brownie Points: The concept. If I had to sit through one more book with a telepathic heroine in it caught between two hunks, I was going to scream. Violet's power is so unique and lends itself so well to making the novel even richer (soooo many sensory details). And there is only one hunk. Best friend Jay turning something more. Both characters are so real and their interactions perfect.

The Ending: I have no words for how... AWESOME it is! I walked away satisfied, happy, and ready to gush. Am I gushing? (BTW I read this book about five or six months ago and I'm still gushing.)

Recommendation: Oh read it. Just do it. Then go get book 2. If you can stop marveling at the pretty covers long enough, open it and read it.

Would I represent it? I would have fought other agents off for it.

Kimberly Derting has another book coming out on November 15, 2011 called The Pledge, read about it here.

Happy reading!
Posted by Vickie Motter at 7:40 AM

Email ThisBlogThis!Share to TwitterShare to FacebookShare to Pinterest
Labels: book review, Desires of the Dead, Kimberly Derting, The Body Finder

I raced through The Body Finder. Especially the second half, my heart rate was up. I'm hoping our library gets Desires of the Dead too!

Fight off other agents? That's an AWESOME compliment. I think it's the best you've given on Wednesday Reads.

I (stalkerishly) read your reviews every week, but I've never been this excited to pick the book up. I guess I know what I'm doing this weekend!

How can I pass it up after that review?! I'm putting it on my to buy list. Thanks for the recommendation!

I completely agree--however, I have one personal beef: the name Violet. It seemed too...fragile for her.

I saw the author at a book signing last month, I have not read her book yet. It's really good to hear more priase for it. After awhile, honestly, a lot of YA paranormal starts sounding the same. I need to be more discierning with what I read.