Wicked Lovely by Melissa Marr. I was actually pleasantly surprised with this book. I hadn't expected to like it as much as I did. Basic story line: girl gets sucked into a world she didn't want to get involved with, and men compete for her attention. But the voice, characters, and the ending won me over. 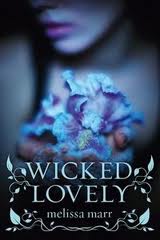 
Rule #3: Don't stare at invisible faeries.
Aislinn has always seen faeries. Powerful and dangerous, they walk hidden in mortal world. Aislinn fears their cruelty—especially if they learn of her Sight—and wishes she were as blind to their presence as other teens.

Rule #2: Don't speak to invisible faeries.
Now faeries are stalking her. One of them, Keenan, who is equal parts terrifying and alluring, is trying to talk to her, asking questions Aislinn is afraid to answer.

Rule #1: Don't ever attract their attention.

But it's too late. Keenan is the Summer King who has sought his queen for nine centuries. Without her, summer itself will perish. He is determined that Aislinn will become the Summer Queen at any cost—regardless of her plans or desires.

Suddenly none of the rules that have kept Aislinn safe are working anymore, and everything is on the line: her freedom; her best friend, Seth; her life; everything.

First Sentence: From the Prologue: "The Summer King knelt before her. 'Is this what you freely choose, to risk winter's chill?'" Here's what I love about the Prologue--it's short. While it isn't super important to the story, it does let you see how it began with one character, and helps round out her story arch.

While deciding whether I actually wanted to read this book, I looked up the excerpt from Amazon. It was the first few pages of Chapter 1 that hooked me. "'Four-ball, side pocket.' Aislinn pushed the cue forward with a short, quick thrust; the ball dropped into the pocket with a satisfying clack." She's a fun character, and we get to see her spunky attitude combined with her fairy-sight and how that's affected her, right off.

Beefs: This sassy, pool playing chick that opened the book sorta goes away. She is still spunky, but she's also a shy character who doesn't put herself out there very often. It's nice that she has so many facets, but I was disappointed that we didn't see her return to the pool hall. But her friend Seth and his uniqueness mostly made up for it.

POV shifts were good, but at time I found myself skipping ahead to get back to the main story line. Seth and Aislinn are amazing together.

Brownie Points: The end. I can't give it away. But the decision Aislinn makes--about which boy she ends up with--seriously made me happy.

Recommendation: If you like YA paranormal romance, read it.

Would I represent it? Probably. :)

I'm not a big fan of faery stories but purchased this for 99 cents during a promotion. And I loved it. I loved Seth and Aislin And the way the writing drew me into the story was terrific.

I was pleasantly surprised by this one, as well. Admittedly I went into it with a little "harumph, another YA paranormal romance" attitude, but I came out on the other side pretty pleased. The ending clinched it for me, as well. I *loved* that Marr let her protagonist have a choice -- a real choice.

I also read this as part of the $.99 promotion and I really got sucked into Seth and Aislinn's story. The parallel storyline of Keenan and Donia didn't do as much for me, though, and I haven't gone on and paid full-price for others in the series. I *might* have if the bonus material included was for a sequel...to give a teaser of the next story. Bonus material is great e-book marketing (or great marketing, period), so why not use it to draw readers into the next novel in a fairly long series?

Definitely my favorite fairy series ever, though INK EXCHANGE was my favorite book of the series. I loved the gritty, gang feel of this book. :)

It sounds good! I haven't read any fairy stories recently. I'll have to check this one out.

I listened to this one on audiobook on a long drive and thoroughly enjoyed it, even if the reader was a tad over-dramatic.

Good to know. I'd actually skimmed over the synopsis, and thought "I'll come back to it someday." Now I have a reason.

I met Melissa at a signing and she was so gracious, funny, and down to earth. That makes a difference to me when I'm deciding where to spend my money--I bought all of her books!

I've been on the fence about reading this one. But from your review and what Kristi H said above, I'm going to give it a try!

I really liked this book and thought the fantasy world-building in juxtaposition with the "real" world was seamless. Keenan's mother is an awesome villain too!