The Darkest Night by Gena Showalter, was a little too heavy on the romance for me (didn't keep me from sacrificing my sleep to finish reading it all in one day, however).  The romance was well done, of course, from a master like Showalter (site here), it's a guaranteed success.  The plot is what hooked me.  The Underworld Lords are each plagued with a different demon from Pandora's box (you find out in the first chapter, I promise I'm not giving anything away), they are immensely powerful, and an age-long enemy wants them dead--again. 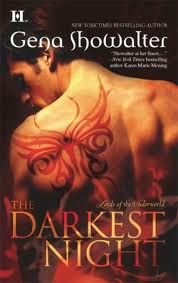 
His powers -- Inhuman
His passion -- Beyond immortal . . .
All her life, Ashlyn Darrow has been tormented by voices from the past. To end the nightmare, she has come to Budapest seeking help from men rumored to have supernatural abilities, not knowing she'll be swept into the arms of Maddox, their most dangerous member -- a man trapped in a hell of his own.
Neither can resist the instant hunger than calms their torments . . . and ignites an irresistible passion. But every heated touch and burning kiss will edge them closer to destruction -- and a soul-shattering test of love . . .
Though they carry an eternal curse, the Lords of the Underworld are irresistibly seductive -- and unimaginably powerful . . .

First Sentence: "Every night death came, slowly, painfully, and every morning Maddox awoke in bed, knowing he'd have to die again later.  That was his greatest curse and his eternal punishment."  Wow.  Talk about getting straight to the point.  The first chapter can bog down in places with a bit of back story, but it's mostly well done and with enough forward momentum to keep you going forward.  It's powerful, emotional sentences like the first one that propels you forward.

Beefs: Like I said, the Romance was a little heavy.  I don't really buy the love/lust and tingly sensations at first sight.  Not that it doesn't work.  Not that it isn't a great Paranormal Romance.  But there were times that I wanted to shove the romance out of the way to get to the paranormal, because the plot was gold.


Brownie Points: Two, actually, and both are characters.  Firstly, Ashlyn.  She can't read minds.  She hears conversations.  Place her in a room and she hears every conversation to ever take place there.  Unique right?  And undeniably handy--and annoying of course.  She's a very interesting character, with a great character arch.  Secondly, Torin, keeper of disease, causes widespread plague any time he touches someone.  How heart-achingly beautiful/horrible is that?!  I want to read his book (though, unfortunately, there isn't one yet).

Ending: What do you expect?  It's Paranormal Romance, and like all Romances, it has a good ending.

Recommendation: If it's your thing, read it.  It does contain explicit sex and (at times) eye rolling yukky love stuff, so approach at your own risk.

Would I represent it? A bit heavy on the romance for me.  It reminded me a lot of The Black Dagger Brotherhood series by J.R. Ward, which is Paranormal Romance, but I think the plot, character, world, and paranormal side of it was better developed in Ward's.  Something like that, I definitely would represent.

Happy Reading!
Posted by Vickie Motter at 9:07 AM

Email ThisBlogThis!Share to TwitterShare to FacebookShare to Pinterest
Labels: book review, Gena Showalter, Lords of the Underworld, The Darkest Night

Ooo...enjoyed your review! May have to check this one out--thanks for the 'warnings' ;D

This sounds really intersting. I love the idea that they're demons from Pandora's box. Thanks, I think I'll pick this one up!

I enjoyed reading your review although it isn't something that would appeal to me per se. I'm more or less commenting because I think it's awesome that you got your degree in English and can't believe that people have told you it's worthless. I think getting a degree in English is just as valid as one in any of the sciences and in many ways makes you a great communicator. Just seeing what you've written here on this book review is only a small example of the many talents such a strong background gives to you as a toolbox for approaching life.