Common Spelling Errors and Other Rants

Just a few things that make me chuckle (and/or tear my hair out). You'll find the same advice pretty much anywhere, but in case you missed it, you get it here too.

Bizarre and Bazaar are two different words.  I've actually seen this misused several times in manuscripts.  I don't judge.  I laugh, but I don't judge.

The dreaded double space... I'm a little behind the times. Recently I mentioned on Twitter that I heard you are no longer allowed to double space between sentences. Look, I'm doing it--it looks weird. Aside from the cramped-togetherness, I'm bewildered I hadn't heard of this until now. Several people responded to my tweet and said EVERYONE is demanding this change, agents, editors, EVERYONE. Since I want to be part of this community, I'll give it a try. It's hard. Each time I press the space bar after a period I want to do it twice. Each time. Ack. Ack. Ack.

"I love this Alot" You'll never misuse "a lot" again. And if you twitch every time someone else uses "alot," you can think of this and smile. 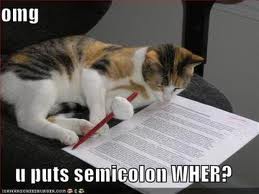 The semicolon. I take it as a personal insult if someone misuses the semicolon. I've always been a semicolon lover; it's my favorite form of punctuation. If you don't know how to use them, don't use them. If you're clear on the rules, then have fun. But, again, use them sparingly (and don't read Herman Melville, the man is a semicolon fanatic, and your own writing will be swayed by his influence--believe me, I learned the hard way). Two rules for the semicolon: 1 use it to separate two complete sentences of a connected thought without a coordinating conjunction (and, but, or), or with a transitional phrase (of course, however); 2 use it to separate items in a complicated list (ie dates, or in which you use commas within the items).
Surprisingly, Wikipedia has a pretty good entry on semicolons right here.  (Hope you noticed I used the semicolon twice in that paragraph, and I used them correctly.)

Since I'm on a roll, I might as well mention two things people always look for. Easy ways to tell a great manuscript from an ok manuscript.

Adverbs. Stay away. They clutter sentences and don't convey as much as you might think. The reader should be able to tell what's going on in the scene without the adverbs. If you absolutely need the adverb, see if you can rewrite it without it (show don't tell). A few adverbs is fine, but I don't want to see ten on a page. Adverbs are much more powerful if you use them sparingly.

Dialogue tags. I'm guilty of it too. I used to think dialogue tags were awesome! Use as many as possible and never use the same one twice. WRONG. Use different dialogue tags sparingly. If you only have one "he/she said" in every dozen (or heck, even every other one), you're using too many dialogue tags. Stick with "said" and "asked." Replace all of your dialogue tags, go back and read it. If the reader can't tell what emotions the character is portraying without your fancy tags, you need to rewrite the scene (show don't tell). As with adverbs, dialogue tags are going to be much more powerful if you use them sparingly.

Happy writing!
Posted by Vickie Motter at 10:05 AM

Thanks Vickie! Bringing all of these 'easy' errors to the forefront of my mind has made me paranoid; I intend to go read through my manuscript for the, oh, bazillionth time. ;) Should I go fix all my double spaces? Or, as an agent, would you overlook? Trying to re-train my muscles...

A note about semicolons: if you use too many for the editor's taste, she will change them to conjunctions. Then you get the edits and spend days fixing it so your work doesn't look like a conjuction train wreck.

I'm so glad you mentioned the two standard uses of semicolons. Those are the two ways I've always been taught to use semicolons, but I've seen so many misuses lately that I've wondered if I was wrong. Good to know I'm on the same page with someone:)

Oh, and the homonyms I tend to mess up are discreet and discrete. When I was a Math Ed major, I encountered "discrete" much more often, so I have to remind myself that "discrete" doesn't mean inconspicuous.

Aak! The double space/single space thing is killing me. When I took typing, I learned double space after a sentence and it is ingrained! I heard only recently that this was an issue...thankfully the "replace all" command works. :)

I have to admit, I get twitchy when people I'm critiquing get some of these wrong. I'm certain I'm guilty of at least a few of these mistakes now and then myself though! Thanks for this, I'll be linking to it!

As for the spacing after a period, it harkens back to the time of typewriters and dot matrix printers. Those machines (and early word processing software) placed each character in the center of each space, such that there was equal distance between one character and the next. This created the need for two spaces after a period, in order to distinguish where a sentence ended.

However, modern software (as you can see in all the text on this page) places periods, commas, exclamation marks, etcetera directly next to the character immediately preceding it. This creates a larger space between sentences, thus vitiating the need for two spaces to visually separate your sentences.

Great list! As an English teacher, I see these mistakes far too often. And as someone who took typing a long time ago, I sympathize with the automatic double space after each period!

Please don't hate me for what I'm about to say next, but I think you want to change your "sparringly" into "sparingly." To "spar" is to fight, as in "The boxer has been sparring with his trainer." I'm sure you don't mean for us to use our adverbs in a way that would have us fighting. :)

Agree with AJ. 'Sparringly' stuck out at me while I was reading. It should be Sparingly. :^)

Loved the post. Ah, the wily semicolon! Try teaching all of this to a room of ten year olds and staying sane. Yikes. I think we've conquered they're, their, and there. Some tricks I use for the kids: Here is hiding in there, both directions. You'll find an heir in their, both people. They're works if they are works. I've probably made some semicolon errors in this entry. Avert your eyes.

I used to think the its/it's thing was complicated, but really, it's easy! Thanks for the great reminders.

I'm from the 70s. I always use 2 spaces, LOL. So, when my final edit is done--I use the replace all and just fix all my sentences.

I've read different comments on tags. When I'm reading a lot of dialogue (I'm a dialogue driven writer, I'm afraid) I find that it can get confusing if there are no tags.

Lana looked at the motorcycle with a raised brow. "You expect me to climb onto that?"

So--kind of longish tags :) Are they still allowed?

I used to teach English--and I still forget some of the basics. I read somewhere that editors have semi-colons. I love them.

I keep getting beta reads and critique reads with the "its" "it's" mistakes. "Your" vs "You're" Contractions, people, contractions!

My pet peeve is the wrong formatting for tags, like this:

Ah, wonderful post. And I am so glad someone else pointed out that you did not mean to spar with us, except perhaps sparingly. But personally, my personal mission is to change the English language so that alright is on the same par as All right. What thinkest you? Is that alright with you??

I get "your" and "you're" wrong when I'm typing furiously.

Great news is, with all our modern day technology,we're still making these mistakes! LOL

My favorite spelling error I see writers make is when they type 'write' instead of 'right'. :)

Yes, once you get used to the single space after a sentence, the double just looks odd! Now if only I could get affect/effect right. . .
erica

too, two, to
and
than and then
and
good and well
DRIVE ME INSANE and has since I was in middle school. Literally want to punch people in the head when they write/say these things. I correct managers when they speak incorrectly. :)

i'm not going to lie though, i'm super comma and semicolon happy

oh--and my sister just sent me this link. i thought i'd pass it along. i found it helpful.

I...wake up from...writing mode...with dots Everywhere. I know I have to go back and remove them - I call it doing my dot penance. I am ellipsically challenged. I also pullllllll my words out for no reason. I can not see the correct form of thier/their unless I say THE-ear in my head for every one. Thank goodness spell check helps me.

My pet peeve in novels are missing tags. Don't make me count back to see who the heck is speaking.

I space space - yes I learned on a real typewriter and still catch myself waving my hand around for a return bar when I am really going. I don't make stupid dot trails on an old typewriter for some reason.

Like, randomly added to a string of words makes me crazy, because like it sounds so unlikeable.

Thanks for the 'watch outs!" (hehehe)