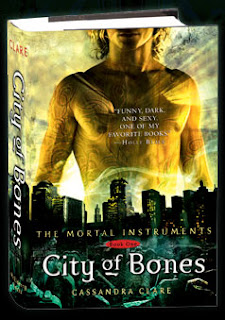 City of Bones by Cassandra Clare. After a discussion on Twitter about the best troubled, broken, bad ass boys in YA, several people convinced me to finally (finally!) read this series. Jace (who wins the most broken boy award in YA) was the original reason I started reading, but all the characters convinced me to continue reading.


When fifteen-year-old Clary Fray heads out to the Pandemonium Club in New York City, she hardly expects to witness a murder — much less a murder committed by three teenagers covered with strange tattoos and brandishing bizarre weapons. Clary knows she should call the police, but it's hard to explain a murder when the body disappears into thin air and the murderers are invisible to everyone but Clary.
Equally startled by her ability to see them, the murderers explain themselves as Shadowhunters: a secret tribe of warriors dedicated to ridding the earth of demons. Within twenty-four hours, Clary's mother disappears and Clary herself is almost killed by a grotesque demon.
But why would demons be interested in ordinary mundanes like Clary and her mother? And how did Clary suddenly get the Sight? The Shadowhunters would like to know....

First Line: ""You've got to be kidding me," the bouncer said, folding his arms across his massive chest." The scene begins at Pandemonium, the all ages club Clary likes to go to, and at which she meets her destiny. It's very effective first scene, and introduces us to all the major players right off, without bogging us down or confusing us with too many characters.

Recommendation: This is a really great YA Urban Fantasy with a little romance and a great twist, plus it has it's own great world, rules, and magical twists you get to learn along with the main character. And you don't have to be sad at the end of book one because it's a series!

Would I represent it? I'm definitely looking for Urban Fantasy, but it has to be extremely unique (like this one) because the market is tough right now. Also, I'm looking for Adult Urban Fantasy, and The Mortal Instruments series is a good example of well written Urban Fantasy that both YA and Adults should read and emulate.

Hmm...a troubled, broken, bad ass boy??? I might just have to pick this series up!

I have read it, loved every minute of it, and here's to hoping the movie doesn't ruin it.

I have this one in my TBR pile. Can't wait to read! I just ordered me Anna's French Kiss (per your suggestion:) and I can't wait to get to both of them.

I actually searched for your review of this book when I first found your blog and was surprised you hadn't done it yet :).

Jace Wayland is one of my favorite leading guy characters ever. I love how Cassandra Clare (and also Becca Fitzpatrick with Patch) can create these obnoxiously lovable guy characters, and I'd love to talk to them about how they do it.

They manage to get us invested in these edgy guys, and then they can get away with just about anything after that. At this point, Jace and/or Patch could commit just about any atrocity and I'm pretty sure I'd find some way to be okay with it.

And the other thing that's interesting to me about Cassandra Clare's books - I picked up Clockwork Angel specifically to see whether or not she copied and pasted the Jace character into another setting (since it takes place in Victorian London). The MC in Clockwork Angel (Will) has a lot in common with Jace, but they're different enough that you can have some fun with the compare/contrast. You know, if you're cool and in to that sort of thing... :/

I really liked the first three books in this series, but so far I've been less than impressed with book 4. Mostly because it seems like Cassandra Clare is just starting over with the story. Puh-leeeease... we already went through all the painful Clary and Jace drama... why drag us through it all again?!

I'm in love with this series!
Although I agree with Julie about the fourth book. It did feel like she kind of just started over. The drama drove me crazy!
Anyway, great post Vickie! Glad you like this book! :)


I say many thanks to Mr. admin website I read this, because in this website I know a lot of information information that I did not know before his
Obat Benjolan Tumor Di Ketiak
Obat Tradisional Tumor Lidah
Cara Menghilangkan Infeksi Rongga Mulut