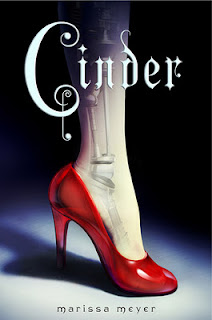 I am going to do my very, very best not to squee like crazy during this post. I'll just state it right here.

Cinder by Marissa Meyer. Two words. Cinderella. Steampunk. Eek! (that was not a squee!) It's the first fairytale retelling in the Lunar Chronicles. (I'm not at all excited for the rest of the series. teehee)


Humans and androids crowd the raucous streets of New Beijing. A deadly plague ravages the population. From space, a ruthless lunar people watch, waiting to make their move. No one knows that Earth’s fate hinges on one girl. . . .

Cinder, a gifted mechanic, is a cyborg. She’s a second-class citizen with a mysterious past, reviled by her stepmother and blamed for her stepsister’s illness. But when her life becomes intertwined with the handsome Prince Kai’s, she suddenly finds herself at the center of an intergalactic struggle, and a forbidden attraction. Caught between duty and freedom, loyalty and betrayal, she must uncover secrets about her past in order to protect her world’s future.


First Line: "The screw through Cinder's ankle had rusted, the engraved cross marks worn to a mangled circle." Not only is this line so unexpected, it is reminiscent of Cinderella. Because everyone knows the story of Cinderella and there is something to do with feet and shoes at the end--but no. In this one, we start right at the beginning knowing she has a mechanical foot. She's a cyborg. (You know exactly where that whole steel foot is leading, don't you?)

And because I love how it immediately sets us up in a world of futuristic/steampunk/technology not with the world itself but with Cinder's own body parts, I have to give you a feel for the first few.

"The screw through Cinder's ankle had rusted, the engraved cross marks worn to a mangled circle. Her knuckles ached from forcing the screwdriver into the joint as she struggled to loosen the screw one gritting twist after another. By the time it was extracted far enough for her to wrench free with her prosthetic steel hand, the hairline threads had been stripped clean.

"Tossing the screwdriver onto the table, Cinder gripped her heel and yanked the foot from its socket. A spark singed her fingertips and she jerked away, leaving the foot to dangle from a tangle of red and yellow wires."


Brownie Points: Gah! Other than being an awesome new imagining of the Cinderella tale? Two things, actually. Both odd. One. The setting. They're in New Bejing, or The Commonwealth. I'm not brushed up on all things Asia and whatnot, but I think (think) the world is kinda a mash of many of the Asian cultures. And it's flavoring of the world, not so engrained that people can't relate to it. Plus, my nerdy side is happy with the connection back to the origins of the Cinderella tale, which came out of China.

Two. I'm not sure why I'm noticing it so much right now, but the POV. I'm, just a little bit, a little tired of 1st person. This is in 3rd and occasionally jumps over to Kai's POV as well--also 3rd. In the beginning-middle somewhere, we also detour into the doctor's brain (yes, there's a doctor, and that's all I'm saying about that). He is a very important character, fascinating/crazy mind, and though this is YA and he is an Adult, I felt the jump to him fit well. It's not something you often see. And something you must consider carefully before attempting.

Recommendation: For all YA lovers, scifi/steampunk lovers, and fairytale retelling lovers. Ya'll might know I adore Gail Carson Levine's Ella Enchanted--this might have surpassed that one. The mechanical foot won me over, what can I say?

Would I represent it? Other than the obvious YES, I'm not officially looking for fairytale retellings. Because they are so incredibly hard to do. If, however, they fall into one of the other categories I'm looking for (historical fantasy, scifi, steampunk, as of now unknown mash-up category), I'm willing to take a look. It has to be impeccable though, because I'm a bit of a fairytale retelling snob.

Someone get this mic away from me.

Posted by Vickie Motter at 9:31 AM

So I pretty much never comment, but I had to. I LOVED Cinder. I've been raving about it since I read it in March, and I love when I find someone else as much in love with it as I was/am/will-forever-be.

Since you promised not to squee, I'll do it for you: squeeeeeee!

Gah! I've had this book on order through the library and it can't come soon enough, I tell you!!! I adore the whole idea of it (and your review makes me that much more excited). Also, we watched Ella Enchanted over weekend with our kiddos. *le sigh* I do love a good fairytale spin-off.

Since I always LOVE your book recommendations, this one goes on my TBR pile immediately. Reading Wanderlove right now and loving it. :)

This book has been on my TBR list for a while. After such a rave review, I might have to move it to my TBRASAP list! :)

Def on my TBR list, though I felt that way the first time I saw this cover on another blog review. I am such a cover junkie and I LOVE this one. Thanks for the lovely Wednesday Read post.

I'm usually way behind on the times, but I happened to see this when it came out, and I grabbed a copy.


Yeah, it was really fantastic.

First off - I loved the cover. I would read the book based on that, I really would.
Second - I have a total nerd side to me as well, the Cinderella thing...what can I say?
Thanks for the recommendation!

Fantastic review! I find myself really wanting to read this now. :)

oooh la la yo sold me!

I loved this book and I think the setting played a major role in this. I love when you get a new culture, fake, real, or a little of both. I thought the Lunars was an awesome aspect as well. That queen was wicked (both in the bad and good ways)

The first five chapters are free via Kindle, so I just downloaded it. I'm sure I'll be getting the whole thing later ... thank you!