A year ago, a member in my book club was raving about this very interesting novel and talking about how cool it was that it was set in the past with advanced mechanics.  I sorta cocked my head at it, went "cool", made a mental note (those tally up to their own version of a slush pile in my head) to read it, and forgot about it.  Until fellow intern Sarah started raving about Steampunk.  At first I just nodded along, pretending (as I usually do) that I knew what she was talking about.  Finally, she defined it for me and told me more about it.  A light bulb went on in my head.  I thought, "Wait, that's what that guy in book club was talking about!"  While he never actually used the term "Steampunk," it was apparently a pretty bright and large sized sticky note in my brain for it to stick out that much.  The novel was Boneshaker by Cherie Priest, which is now reserved at the library for me to read (review here).

My first Steampunk novel was Leviathan by Scott Westerfeld.  I'll be reviewing Leviathan this week in my Wednesday Reads.  In an excellent interview with him (here), he defines Steampunk in his own words.


Steampunk is sort of like nostalgia for Victorian science fiction, and futures that never were. It's a weird mix of the future, like a spaceship, but at the same time it has a very Victorian or Edwardian design. Just those weird juxtapositions of the past and future. Most steampunk is set in the 1800s.--Scott Westerfeld

Looking for a film equivalent of Steampunk?  As of yet, there are not enough to actually consitute a genre.  However, I did find a list here (which I'm not convinced of completely, however, I'm sure they are all very good).  But, for quick reference, if you remember Will Smith in Wild Wild West, the machines were definitely Steampunk.

Steampunk began in the 1980s and '90s, but its beginnings can be traced to Jules Verne and HG Wells (neither of which I have read--bad English major, bad!).

The coolest thing about Steampunk (to me)?  The sub-culture it has spawned.  I spent the better part of the morning bouncing from one website to another, using Twitter and Google to help me fish out the blogs, magazines, and websites.  Not only is there fashion, but also music, books (duh), comics, and cons.

A few sites I found interesting: 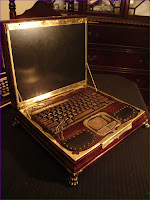 Seattle is hosting its second annual SteamCon this November.
http://www.steamcon.org/index.php

Writing Steampunk?  Get inspired with the typewriter computer.
http://www.etsy.com/shop/usbtypewriter

The jewelry can go from rather wacky, to absolute beauty.  Best site I found?
http://www.steampunkjewelry.ffxoh.com/steampunk-necklaces

Buy Steampunk clothes.  Personally, I'm in love with the boots.  Sadly, I have no money.
http://clockworkcouture.com/

Learn how to dress Steampunk and create your own unique looks.  Basically put together something rustic or renaissance and add goggles.
http://www.squidoo.com/dressingsteampunk

Steampunk has officially been added to the Oxford English Dictionary.  Go Steampunk!  ("bromance" and "defriend" get recognized as well, though my spell check is having a fit)
Time Magazine 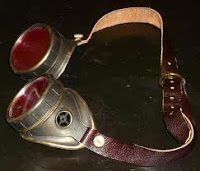 Magazine dedicated to everything Steampunk.
http://www.steampunkmagazine.com/

Last but not least (attention, look here in case you are skimming!), the music.  Just as Harry Potter spawned Wizard Wrock (yes, I'm a fan), Steampunk has its own musical following.  I'm listening to last.fm radio on the Steampunk channel.  I find it strangely soothing to listen to.  A little odd, but appeals to my easily excited brain.
http://www.last.fm/tag/steampunk

So there it is!  A brief overview in Steampunk!  I'm going to continue surfing around, learning more about it, listening to more of it, and reading more of it (maybe one day selling it?).  As of now, I'm the one that's sold.
Posted by Vickie Motter at 11:32 AM

Just loved your comment about the boots since my love for steampunk started with a pair of Victorian boots I saw while shopping at Target! (Kalliope, by Xhilaration)