A few weeks ago I discovered a wonderful thing called Book Bloggers.  They literally read a book and blog about it.  The good ones get books sent to them for free to read and review (cheap publicity).  Good thing I found them, because my well of books was running dry (only eight on reserve at the library this week, eek!).  So I found the Book Faery, and she had given a glowing review of Faery Rebels, by newcomer R. J. Anderson.  So of course I read it.  And of course I loved it.  Here's the description: 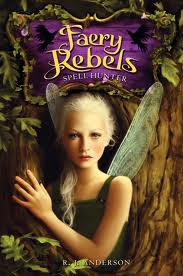 "Forget everything you think you know about faeries. . . .
Creatures full of magic and whimsy?
Not in the Oakenwyld. Not anymore.

Deep inside the great Oak lies a dying faery realm, bursting with secrets instead of magic. Long ago the faeries mysteriously lost their magic. Robbed of their powers, they have become selfish and dull-witted. Now their numbers are dwindling and their very survival is at stake.
Only one young faery—Knife—is determined to find out where her people's magic has gone and try to get it back. Unlike her sisters, Knife is fierce and independent. She's not afraid of anything—not the vicious crows, the strict Faery Queen, or the fascinating humans living nearby. But when Knife disobeys the Faery Queen and befriends a human named Paul, her quest becomes more dangerous than she realizes. Can Knife trust Paul to help, or has she brought the faeries even closer to the brink of destruction?
Talented newcomer R. J. Anderson creates an extraordinary new fantasy world and weaves a gripping tale of lost magic, high adventure, and surprising friendship in which the fate of an entire realm rests on the shoulders of one brave faery rebel. "

Without giving too much away, let's go directly into my usual mode of critique.

First sentence: ""I only want to go out for a little, little while," the faery child pleaded.  "Just below the window, on that branch.  I won't fly away and I won't tell anyone, I promise." "
Sometimes, books that begin with conversation can drive me batty.  And I was ready to be peeved with this one (it's never good when I start reading a book in a bad mood, however, it quickly cheered me up), but the conversation and scene did such a good job setting up the life of the faeries that it redeemed itself.  It takes what you think you know about faeries, and quickly shows you that you don't know a thing.  Then unravels the rest in perfect timing.

Beefs: Because the novel is about faeries, you are, every page, prepared for cutsie.  Is that an actual problem?  The novel never delivered on the cutsie, instead it delves into betrayal, new discoveries, adventure, and the true meaning of love.  Ok, that's not an actual beef.  So, all in all, it was a fantastic read.  I recommend it.

Ending: I'm not telling.  However, I will say this: I couldn't go to sleep until I had finished it, and I fell asleep after the last page with a content smile on my face.  It left me wanting more.  A whole lot more.

Today's lesson?  If you need a good read, and your friends just aren't recommending the right stuff, find a book blogger.

Happy reading!
Posted by Vickie Motter at 7:58 AM

Gah! There I was happily writing my query letter about my own Faerie book when I take a break to peruse your blog...(doing my research like a good hopeful writer should) and I see this! A book that seems to be about the same subject! Already published!

Talk about letting the air our of a person's sails...