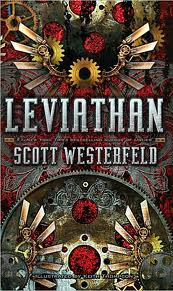 "Prince Aleksander, would-be heir to the Austro-Hungarian throne, is on the run. His own people have turned on him. His title is worthless. All he has is a battletorn war machine and a loyal crew of men.
Deryn Sharp is a commoner, disguised as a boy in the British Air Service. She’s a brilliant airman. But her secret is in constant danger of being discovered.
With World War I brewing, Alek and Deryn’s paths cross in the most unexpected way…taking them on a fantastical, around-the-world adventure that will change both their lives forever." (details here)

(I must interrupt myself for just a moment to marvel at Steampunk covers.  Just walk through a bookstore (I did last week) and see how many you can pick out.  Hint, it's easy.  They really do set themselves apart.)

Scott Westerfeld creates a beautiful YA novel: a boy has just lost both his parents, is on the run, and must come to terms with becoming a man much to fast and having the weight of an entire world war on his shoulders; a girl out of place in society and not allowed to fly... as a girl, enlists the help of her brother, and fools an entire airship of men into believing she is a boy.

But, more than that, it's Steampunk.  (I delved into this fantastical world two days ago in my blog post here.)  This was the first Steampunk novel I've ever read, and it was a great start (five more are on hold at the library).  Beautifully crafted, the imagery is vivid, the pictures (which I haven't seen in a book I've read in more than ten years) helped my imagination piece together the mechanics.

What I love about this one, is that it isn't purely heavy duty machines marching around.  Pitting Clankers (the German side of the war) against the Darwinists (everyone else), we have machines versus fabricated beast-ships.

Time to apply what I've learned makes a great book:

First line: "The Austrian horses glinted in the moonlight, their riders standing tall in the saddle, swords raised."   Nice imagery, but not a line that can be taken on its own.  The first page though, helps set up the character of Alek (we see him playing with some toys, which shows not tells us that he still acts like a boy).

Beefs: none.  I legitimately have no problems with this book.  I want to read the next one.  It was a great coming of age story, a stand alone in a series, and conforms to the idea of steampunk while being completely unique.  I also have Westerfeld's non-steampunk novels on hold at the library (Uglies, which I'm very excited to read).

Ending: satisfying.  Ties up enough loose ends to make it a stand alone, yet leaves you wanting more (the point of a series, right?). 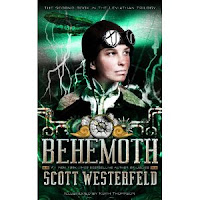 The next in the series, Behemoth, comes out October 5th.  Check out Scott Westerfeld's site here.  I highly recommend you pick up Leviathan, because, whether or not you are into Steampunk, it's a great YA.  And, if you aren't into YA, it's a great Steampunk.  Win-win, I think.  Happy reading!

Posted by Vickie Motter at 1:09 PM