Stork by Wendy Delsol was a lovely surprise.  I thought it would be run of the mill average: new girl, new powers, new boy.  But with a fresh voice that is witty, engaging, insightful, and hilarious, you are immediate best friends with the new girl, the narrator, Katla.


Sixteen-year-old Katla LeBlanc has just moved from Los Angeles to Minnesota. As if it weren’t enough that her trendy fashion sense draws stares, Katla soon finds out that she’s a Stork, a member of a mysterious order of women tasked with a very unique duty. But Katla’s biggest challenge may be finding her flock at a new school. Between being ignored by Wade, the arrogant jock she stupidly fooled around with, and constantly arguing with gorgeous farm boy and editor-in-chief Jack, Katla is relieved when her assignment as the school paper’s fashion columnist brings with it some much-needed friendship. But as Homecoming approaches, Katla uncovers a shocking secret about her past — a secret that binds her fate to Jack’s in a way neither could have ever anticipated. 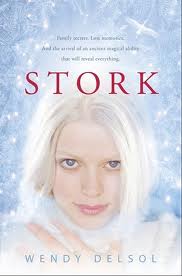 First Sentence: "One moment I was fine, and the next it felt like an army of fire ants was marching across my head.  Seriously.  Fire ants wearing combat boots--heavy, cleated combat boots."  Okay, so that's three sentences.  The first one is great on it's own, I just really loved the third sentence and wanted to include it.  Delsol is a master at using long and short sentences together, but never too much to feel redundant or unoriginal.  And the voice evident in the first sentence carries the promise constantly throughout the entire book.

Beefs: In hindsight, perhaps Katla doesn't give enough weight to a lot of events in her life.  She accepts things as they are, and doesn't fight too hard against anything.  And through most of the novel you realize something very special about her love interest, which she doesn't understand until he has to show her, a few times, and tell her.  She is either slow or just that oblivious (which works for her).  While reading it though, that's what endears you to her.  She is very easy going, but with a spirit all her own, and doesn't get too closely tangled in run of the mill high school drama.

Brownie Points: Katla as a character.  Rather than a tomboy who is strong-willed and secretly feminine when forced to be, Katla is all fashion, all glitz, all glam, all designer labels.  Actually, she's a bit of a snob, the sort that in reality shows you want to punch.  But Katla wants to be a fashion designer, she wants to go to Paris for college, she has dreams and ambitions, and it's all part of her character.  She does grow throughout the novel with a lovely character arch, and she becomes not so snobbish in the end.  But the great characterization doesn't stop with Katla, it's consistently fantastic with each and every character, from her fashion backwards best friends to her Starbucks sipping father, from the eccentric ladies of the Stork society, to perfect, popular, stupid Wade.

Ending: Everything gets wrapped up nicely.  There is a sense of unease in the magic land that Katla doesn't give enough weight to at the end.  I kept thinking, wait, what's this doom and gloom that could potentially destroy the entire world?  Oh, wait, you're happy with your family, friends, and boyfriend now?  Isn't that sweet.  Sarcasm aside, the ending leaves you with warm fuzzies and you won't be disappointed.

Recommendation: Here's a new twist to the mythology bug that seems to be going around.  Rather than the usual Greek Mythology, Delsol has dived right into Norse Mythology and brought up the old childhood tale of the Stork--and really, how cool is that?  Great characters, great voice, great writing, a great, sweet little story that will have you smiling.  It won't wow the pants off of you, but go ahead and pull your socks on a little tighter.

Would I represent it?  Or something like it?  Sure.  Definitely.  Voice, writing, plot, originality.  All my favorite things.

Happy reading!
Posted by Vickie Motter at 8:21 AM

I'm impressed that she went with Norse mythology instead of Greek like I would have expected from looking at the novel. That coupled with great characters, how can I resist?! Thanks for the recommendation.

I love Norse mythology; sounds like a fun read. thank you!

What would you say is the reading level for this book? I teach advanced level reading to sixth graders, and we read East by Edith Pattou, which also includes Norse Mythology.

Just wondering if this book might be a good recommendation for those who are looking to follow up East.

A.J. Not sure how much mythology they would learn from it, but I'm sure they'd recognize elements in it (to me it was more of a good read than learning experience). But I think advanced sixth graders could definitely read it. Amazon pegs it at seventh and up, but I think your kids could do it. The girls would especially like it.

I like the idea of having an easygoing and almost oblivious protagonist. It mixes things up. I'm sure I'm not the only one who gets sick of the hard-nosed strong female prototype.

Your blog is great! I plan on coming back! AND you have fantastic taste in books. :)

Thanks for the response, Vickie! My students are always looking for suggestions for "fun reads" that are challenging and yet age-appropriate, so I'll keep this one in mind.

This book seems very interesting. And Norse mythology? How cool is that! Now don't get me wrong I love Greek mythology, but I think it's go to explore story themes and elements from different cultures and I'm starting to see alot of that in YA which is a good thing. :)

Thanks for the recommendation...I'm always looking for well-written YA books with a new twist.