I love bad guys.  I'm not saying I'd rather be the villain than the hero.  Antagonists add a deep layer to any plot.  It's what the main character is struggling against at the very core of the story (besides themselves and obstacles along the way).

One of my favorite bad guys of all time is Voldemort from the Harry Potter series.  He's so deliciously evil, straight, pure evil.  He is the constant throughout the books.  His evilness knows no bounds.  A lot of evil characters aren't pure evil like Voldemort.  By the time we meet him, he is beyond repair, with no hope of being turned to the good side.  (Since I said it, I can't not mention it...)  Darth Vader is also a great bad guy, with more dynamics to him than all the other bad guys in the series.  He is what Luke must fight against, even though, in the end, he isn't the most ultimate evil. 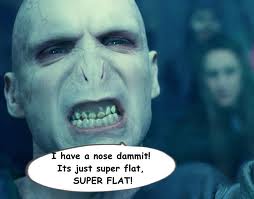 What is so different about YA bad guys from Adult bad guys?  You know, I really don't know.  Perhaps they can be scarier, or more evil, because it's dealing with YA topics.  While battling ultimate evil and saving the world, the main character must also fight his inner demons (as Luke Skywalker and Harry Potter do), and, since the bad guy reveals these inner demons, it makes them seem more evil.

Not every book or story has to have the ultimate evil character, some show the story of a character battling the inner demons, or killer unicorns, or something of the sort.  But make sure you can point in your manuscript to whatever it is the main character must fight.  We like conflict.  Give us conflict.

Tell me, who is your favorite bad guy?  The more evil and complex, the better.

Happy writing!
Posted by Vickie Motter at 10:33 AM

How funny... I just did a post yesterday on the YA boys I most love to hate. Check it out if you have a chance. Not all of them are the "villian" of their particular story, but as far as baddies go, Voldemort is the epitome. Great choice!

Raistlin from the Dragonlance series. I know, he's not a 'bad guy'... or is he? I mean, he's willing to get rid of anyone in his way, even his twin brother... but he smashes the ultimate evil, the Queen of Darkness... but he still kicks dirt in the eyes of his friends... and he smacks around pretty clerics... seriously love him... bad... or good... or something in-between...

I am watching Star Wars right now :-) Speaking of HP, I really loved Snape. In the end, he came out on the right side, but he certainly did some bad guy things along the way. His back story was a lot of fun to learn as well.

I also love the good guys who do bad things. I'm looking at you Angel from Tess of the Dubervilles.

As the worst of the worst in The Lord of the Rings, Sauron is never seen, has no redeeming qualities and the world is not big enough for his ambition.

I hate to just follow the crowd, but Voldemort is my favorite as well. ;-) He is such an evil character. I also think The Capital in The Hunger Games is pretty much pure evil too. However, President Snow doesn't make me squirm as much as Voldemort does. He can make my skin crawl in the books. In the movies though, Bellatrix is the greatest villain.

tiftruitt--Snape was a great character. I hated him SO much throughout the series, but the twist with him at the end was fantastic.

Oo! Great topic! I *love* the uber-villain. Who are my faves?

1. The man in black in LOST. I love a sympathetic antagonist. All he wants to do is leave the island! He knew his mom preferred his brother! Plus, he was pretty good looking for an old guy. I love how JJ Abrams strings his stories together with so many questions throughout. We SO MUCH wanted to know more about Jacob and his brother, yet Abrams would only give us a snippet here, and snippet there. Intrigue is key for me. And we didn't even know the man in black's true name!

2. Rebecca in Daphne Du Maurier's REBECCA. I read this book forever ago, but the protagonist does such a great job of hating, idolizing, and envying her husband's former wife, I couldn't help but like her/wish I were more like her. She had the charisma, the beauty, the wit to lure anyone in. Yet we never met her! She's already dead. And then Max tells us how much he loathes her in the end when poor... what was her name? The protagonist... anyway, the poor thing goes the entire book completely convinced her husband is still in love with his dead wife. REBECCA was a great read.

3. Sloan in ALIAS. Sooo complex. You never know if he's good or if he's bad. The thing he loves most? Well, eternal life, but until the end we're pretty sure it's his wife (who's dying from cancer, btw). We'll HATE him, then he'll do something sweet and we can't help but feel sorry for the guy. Sympathy yet again. I love a sympathetic bad guy.

Okay. I'm done. I promise I don't usually comment so much. :)

oh, two JJ Abrams' references!! as far as television villains go, you're right on the money. I did think Ben was a much better villain than The Man in Black.

speaking of ambiguous Lit villains- the governess from the The Turn of the Screw. Is she crazy? Were the children really haunted?

Haha, I thought about referencing Ben, but I just simply hated him. Such a weaselly little man.

How can anyone beat Voldemort? He's the epitome of pure evil.
Valentine in The Mortal Instruments trilogy was pretty nasty too.

This guy wasn't a super baddie, but the image of him and his "dark" practices were enough to make the reader feel disgust.

"He was as pasty-skinned as she had dreamed, small, and unhealthy-looking, with nails bitten down to the quick of his fingers and strips of angry red flesh around them where he'd picked away bits of skin. His robes were ratty and stained, his brown hair short and uncombed."

He stole children in order to use their souls and turn them into giant metal killing devices. Imagine a giant robot thing with blades that would sever middle ages towns people in half.

Not high on the epic evil level, but his morals were so low and he so disgusted a reader one couldn't help but hate him..especially after seeing what his devices did to people.

Although, I have to agree. Voldemort is up there. I'm working on a baddie myself...next set of edits are fleshing him out. A baddie in love? Slightly tricky.

I like a bad guy who can also make a reader/viewer care. Severus Snape is a great example of this, and I agree with the assessment of Ben from Lost. Both characters did some truly heinous stuff, yet they invoked passionate support from fans.

It takes true talent as a writer to accomplish that depth in a bad guy.

I was going to mention Valentine and Snape, as well. I love bad guys who you're not sure at first are the real bad guys or not. Even in the end, I still wonder if Snape was truly a bad guy or simply trying to stay alive. Luke, from the Percy Jackson series, is another one that hangs in the balance. I still love purely evil bad guys, too, like Voldemort and Sauron. While this is more MG than YA, I love Hook! Graceling has a decent bad guy as well.