Wednesday Reads: Girl in the Arena


During the week, Lyn lives in a big house in Cambridge, and hangs out with friends in Harvard Square. But over the weekends she cheers her father on when he gears up for neo-gladiator competition—a high-profile televised blood sport that rivals the NFL. Lyn’s father is the top player in the league, and the paparazzi that have always swarmed him have started to dog Lyn’s every move. All this fame comes with an even higher price. Lyn’s family lives with the constant presence of violence, uncertainty, and a strict cultural code set by the Gladiator Sports Association. When a skilled young fighter slays Lyn’s father, the GSA imposes an unthinkable sentence—Lyn must marry her father’s murderer. Though her mother has made a career out of marrying into Glad culture, Lyn is prepared to do whatever it takes to claim her independence. Even if it means going into the arena herself….  Lise Haines’s debut novel, a dark satire for our time, is a mesmerizing look at a modern world addicted to violence, fame, and greed—a world eerily close to our own.

First Sentence: I'm skipping the prologue because it's the history of the Gladiator sport and, while informative and helps set up the entire novel, isn't thrilling. In the first chapter: "The clerk asks for my autograph." Also, not thrilling. But it sets up the fact that Lyn is somewhat famous.

Beefs: That "no cigar" thing comes mostly from the execution of the novel. The plot and characterizations are fantastic, flawless almost. But the writing style was very... forgettable. Which, combined with the almost flawless plot and characterizations, is a complete contradiction. Mostly what bugged me about the writing was that dialogue was presented with dashes when someone spoke, rather than the usual quotation marks. It bugged my mind so much I almost stopped reading. Probably the other thing that bugged me was the fact that this novel is defined as "dark satire." I'm good with the dark part (I like the plot, remember?) but the satire part I have half an issue with. Call it the ending, follow through, lack of action, I'm not sure but something was off. 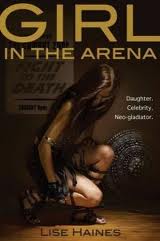 Brownie Points: The world. At times you think you've been transported to a futuristic dystopian society, but Haines is very good at sneaking in references to things we are very familiar with today, so we remember we are in today. She references movies, books, technology (though some of their technology is above and beyond our own), second lives, etc. Brownie Point 2, as I said above, the plot. I love the idea. A sort of Gladiator meets Hunger Games. Brownie Point 3, the cover. Beautiful. If I'd seen it on the shelf (found it on Amazon I think), I would have snagged it right up.

Ending: Not satisfying. Great build up, but once you get to the end scene, it sort of ends. I think this has something to do with the "satire" part of the genre, like there was a point to be made. But I think the point would have been better made if she'd driven the ending with more force (more Hunger Games, or even Gladiator).

Recommendation: I'd love the opinion of someone who likes satire. Perhaps this is one of those Fight Club things (which she references). I have complete respect for Chuck Palahnuik, but the guy is a little to much for my brain to handle (perhaps this is contradictory as well, considering my more morbid tastes in books and movies).

Would I represent it? I'd definitely go for something with a plot and world like this. The characters are great as well. But I would have rejected this if I found it in my slush pile, or tried to convince the author to change it.
Posted by Vickie Motter at 9:20 AM

I've been contemplating picking this one up. The concept is very interesting to me. But satire isn't my taste and odd tweaks like dashes where there should be quotations marks would probably really bug me. Perhaps I'll read a few pages in the bookstore before I take it to the checkout! Thank you for the review.

I hadn't heard of this book before, but I have to agree with Heather's comment. The story concept is amazing, but things like the dashes would probably bug me. The fact that it has a "meh" ending dissuades me, too.

It peaks my interest enough to add to the "To Read" list. But, the thought of a not so satisfying ending does not encourage me to move it to the top of the list.

I totally agree with you on this one Vickie. I really enjoyed the book (worth the purchase price) but there was just something about the ending that was a bit, I don't know, 'eh' for me. It was very hard to put my finger on (still trying) and I think part of the issue was that I liked the story so much that having the ending be 'eh' caused me to overreact with WTF? and not be able to articulate exactly what made things 'eh'.

A note on the dash dialogue thing (which did bother me too). I had the chance to consult with Kristin Cashore at a conference on why dialogue might be framed in such a way, and she said some of the translated versions of her books use dashes instead of quotations. I haven't been able to find out exactly where Girl in the Arena was first published, but it seems that the dashes are maybe a translation thing from it's original language to english.

Good reminder that even good books can jump the shark by the end.

I may pick it up to better understand what you're talking about. I guess it goes to show a mixed bag review can still peak people's interest:)