Spellbent by Lucy A Snyder isn't a waste of time.  Oh, and apparently it's a debut, so props to Snyder.  It's Paranormal Romance in the sense that love is what drives the plot forward, the only reason main character Jessie Shimmer is defying the government's order to leave her boyfriend where he is (in hell) and stop meddling.  You meet Cooper in the first chapter, and see him again at the end, but otherwise, other than Jessie reflecting again and again about her unconditional love, we see no romance.  This is Paranormal beats Romance for Romance sake. 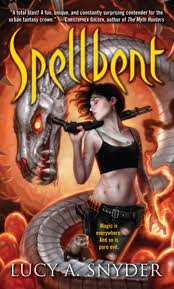 Snyder’s debut is the first in a new urban-fantasy series starring twentysomething Jessie, an apprentice witch, and her wizard tutor and lover, Cooper. Both Jessie and Cooper have animal-shaped familiars (demons in disguise) to assist with their magic. All hell breaks loose when Jessie and Cooper start a rain spell in the city park, and a reality-shifting portal arrives along with the storm. Jessie barely survives the mayhem and soon finds herself on the outs with the local magic community after she insists on hunting down and rescuing Cooper. This fast-paced urban fantasy has a few twists that make it stand out from the pack. Yes, the plot moves quickly, but that doesn’t stop Snyder from developing her characters and building her world. Fans of Kim Harrison’s Rachel Morgan series should be pleased with Jessie, another butt-kicking female witch who doesn’t let anyone tell her what to do.

First Sentence: From the prologue: "My name is Jessie, and I'm the reason why your life is about to change forever."  I have no idea who she is addressing, and why my life is going to change.  Apparently, you need to read the next book in the series (or perhaps the next one, or the one after that?) to find out.  Honestly, I could have done without the prologue.  It tells me nothing.

From the first chapter: "Cooper woke me up before the nightmare did."  It gives you plenty of information while leaving enough questions to be answered in the following sentences.  What bugs me about this opening though is the ambiguity.  Is it her nightmare or Cooper's that would have woken her?  It wasn't clarified until many sentences later.

Beefs: Cooper, probably from the fact that he is absent pretty much the entire book, is under developed.  Due to an evil character in the book, I actually started to wonder if Cooper was a bad guy too, playing Jessie.  This would have been a great device, start doubting Jessie's decisions, however, it isn't entirely clear whether this was intentional by the author or not.  Cooper started bugging me, a lot, and I started to hate him (and in turn, Jessie, because she wasn't figuring anything out fast enough for me to decide whether or not to like him), and it isn't until EVERYTHING is revealed that I got sympathy for Cooper--but then I had only sympathy for him; I forgot about why Jessie loved him in the first place, and saw him as a weakling Jessie needed to save.

Brownie Points: Despite my rant above, it was a good book, good plot, and mostly good (fast) pacing.  Once Jessie made up her mind to kick butt, she let nothing stop her.  I loved her familiar, ferret Pal, who waxed and waned between stuck up and helpful and funny.  Dogs and cats are so overrated as familiars, I was happy to see Snyder taking a new approach, even if Pal wasn't.

Ending: Except for the epilogue, which did nothing but remind us that Snyder (Jessie) has a terrific, funny voice, the ending closed enough doors to leave us satisfied, while keeping one or two open for a sequel.

Recommendation: If you like sassy female leads with a good voice, a twist on Paranormal (no vampires here, I promise), a whirlwind ride you literally don't know how it's going to end, less romance than paranormal, and a smile/horrific look on your face the entire way through, then I'd definitely recommend this.

Would I represent it? Very possibly.  Like I said above, there were many things I found wrong with it.  While I like more paranormal than romance in my Paranormal Romances, this left me wanting.  However, I'd definitely go for something very similar (but not too similar or you stop being original, duh).

Happy Reading!
Posted by Vickie Motter at 10:53 AM

Witty and with a female lead that kicks butt, this sounds like one I'll have to read! Thank you for the review.

This is already in my to-read stack! I'm curious about your "would you represent it" question: if you had come across this in the slush, would you have asked for extensive edits to even out the book? It sounds like Cooper's absence would be a major thing to fix.