I really don't know a lot about E-Readers or tablets.  I'm not even sure those are the right terms.  Until last week, when a momentous moment occurred in my life, I was perfectly content keeping this topic at arm's length.  Now however, face to face with the issue, I decided to educate myself, however minimally. 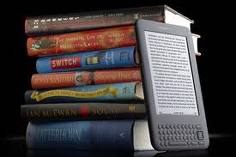 The momentous occasion was this: my mother won a Kindle.

As prepared as I was to disown her for owning this hated device, I forgave her and allowed the evil into our home.  (Then the next day she won a 47' TV.  I was really ready to disown her, simply from shock)  Grudgingly, I took the Kindle into my own hands, and looked at the simple white casing.  And accidentally pressed the on button.

"That's the screen?!" I exclaimed.

"How'd you do that?" my technology stunted mother asked over my shoulder.

I had heard that the new readers had easy to read screens, but I was still expecting an old gameboy type screen (the last hand held device I had in my possession... twelve years ago, before the fancy color gameboys and PSPs came out).

OK, I had to admit it, the quality is pretty cool.  Still, I put the Kindle down, vowing to continue hating it. (I'm stubborn... just a little.)

The next day I find my mother downloading free classic books onto her Kindle.  So it gets another point: it's easy enough my mother can use it.  Cue the balloons and trumpets.  Among all of Jane Austin, Mary Shelley, Grim, Hans Christian Anderson (she has a thing for Fairy Tales apparently), were two of Jane Austin's works I have yet to read: Northanger Abbey and Mansfield Park.  I haven't read them because I just never got around to buying the books.  And the one time I got them from the library, I was very tired of reading classics, so they were returned unread.  Now, however, I can give Jane Austin one more chance.  Next time I go on a trip that I can't take a lot of books, I plan to kidnap Mom's Kindle.

GASP!  Me?  A Kindle?  I'm not about to go buy one, I still prefer having the paper in my hands, and not having to buy books--I borrow from the library (it's a more expensive habit than smoking, I swear, not that I would know).  And yes, I know that I can get free books on the Kindle.  But I assume those are mostly self published authors trying to get a larger audience.  I applaud those people I do, and I don't want to offend anyone.  But I read bad manuscripts every day.  I really don't want to download one and actually commit to reading one.  My solid, traditionally published books that I hold in my hands and covet and read, those I know are going to be at least decent.  I'll trust the experts here.

With all these thoughts in my mind, I Googled "Kindle".  Simple as that.  Google Box--> Kindle--> enter.  Under "news for Kindle" came a blog post: "Why you shouldn't buy an e-reader".  Well, what do you know?  Something that appeals to me!  So I click on it.  And you should too, right here.  He gave the same reasons I did, interviewed some people, and reported that roughly (his guess, not an official poll) one-third of e-reader owners use their readers a lot.  Another third use it sparingly, and the remaining third keep in their drawer of unused things.  It's a pretty convincing blog post, all in all.  It made me feel hopeful that the fad will be just that--a fad.

On the other hand, here's another cool post I found about the Kindle 3, right here.  Looks like the Kindle isn't going to be one-purpose for long.  Games would be nice.  I would love to be able to download my own documents to an e-reader, but I suppose that's the purpose of an I-Pad isn't it?  I'm not about to rush out and buy one, but it would be nice to be able to read my partials on an e-reader instead of carting around my laptop or a pound of paper and kill a forest in the process.  I'll be patient, I'm in no hurry.  I am curious though, as to where this market will go.  More e-readers in the future?  More features?  Can we have it on our phone maybe?  Or a key ring?  Maybe they will go the way I-Pods did a few years ago and get smaller and smaller.  So small the screen gives us one word at a time!

So I'm getting carried away with my sarcasm.  Still, it is pretty cool (putting the optimistic part of my personality to use here) that books are now on light weight readers.  Bet Gutenburg didn't see that coming.

Happy reading, no matter what format you decide to read on.
Posted by Vickie Motter at 4:00 AM

Yeah, I've been ignoring the whole e-reader thing. I can't imagine curling up on the couch on a cold winter's night, afghan covering my lap, my attention glued to a little screen as I 'flip' through the pages of an electronic book.

But who knows, maybe some day I'll join the e-reader generation....

And Jane Austen - I've read all her novels. The two you haven't yet read are probably my least favorite. Give me Emma any day!