Soulless by Gail Carriger, can only be catagorized as the following: Steampunk meets the Sookie Stackhouse novels in a Cozy Mystery with a host of quirky characters Jane Austin could love.

Funny, engaging, unique.  This book is definitely an original.  Add a character with a supernatural (preternatural, as it is called within the pages) talent that is neither seeing ghosts or reading people's thoughts, I was hooked. 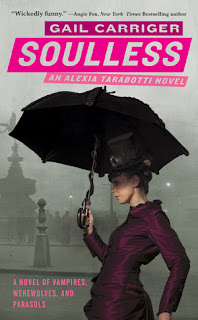 "Alexia Tarabotti is laboring under a great many social tribulations. First, she has no soul. Second, she's a spinster whose father is both Italian and dead. Third, she was rudely attacked by a vampire, breaking all standards of social etiquette.

Where to go from there? From bad to worse apparently, for Alexia accidentally kills the vampire -- and then the appalling Lord Maccon (loud, messy, gorgeous, and werewolf) is sent by Queen Victoria to investigate.

With unexpected vampires appearing and expected vampires disappearing, everyone seems to believe Alexia responsible. Can she figure out what is actually happening to London's high society? Will her soulless ability to negate supernatural powers prove useful or just plain embarrassing? Finally, who is the real enemy, and do they have treacle tart?"

First sentence: "Miss Alexia Tarabotti was not enjoying her evening."  Not the best of first sentences.  It does make you wonder who she is and what is happening that she doesn't like.  The first paragraph however, gives you a world of information, as well as giving you a great voice that carries throughout the novel.  But, before the first sentence, is the chapter title, which hooks you as well: "In Which Parasols Prove Useful."

Beefs: I've been reading first person for so long, getting thrust into third person omniscient is discombobulating.  It was done well, but at times I felt like I had whiplash going from one paragraph in one character's brain, to the next paragraph in another character's brain.  It didn't happen too often, so it could be overlooked, but every time it happened, I noticed it.

Recommendation: Read it if you like romance, steampunk, Jane Austin, London, vampires, werewolves, mysteries, or original characters.  It fullfills all your possible wants.

Would I represent it?  I hope that if something this spectacular landed on my desk, I would recognize the value immediately and snatch it up.  However, if it had landed on my desk, I'm not sure I would have.  So this one I'll leave to "chance" (depending on mood, shape of manuscript and errors, amount of work to get it ready, author's previous history).

Happy reading!
Posted by Vickie Motter at 8:14 AM