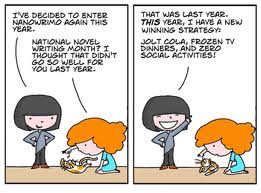 National Novel Writing Month.  It's a month where writers set a goal and write as much as they can.  Ah, that's why lots of my friends disappeared during November during college.  Smart, by the way, having a writing month end only two weeks (in some cases one) before final exams.  Glad I hadn't known more about it earlier.

So today, we are a week away from November.  In honor, I decided to learn more about it.

The experts have some good advice.  Nathan Bransford tells you what you need to have in place before the month even begins.  You need to know what you are going to write.  Why waste two or three days staring at your computer screen with no idea where to start?

Fuel Your Writing gives a brief background and insight into this hectic month.  "NaNoWriMo has grown, from a 21-person book party in 1999, to hosting over 165,000 participants just a decade later."  That's how it started?  Awesome.  Oh, the powers of the internet.

So, tell me dear readers, about your experiences with NaNoWriMo, and any advice.  For, this year, I will be participating in NaNoWriMo (more on that later this week).

Happy writing!
Posted by Vickie Motter at 11:08 AM

Getting out fifty thousand words in a month? Yeah, I can do it. But they're probably not going to be very good words.

I think I'm gonna try it. It's like the pressure you get when you know you've been procrastinating something for way too long. This is the first year I've heard about it. I'll attempt it, with the grand hopes of completing the challenge. It's looking like I'll have to go with the 2,500/day goal. Because then if I actually make it to the end, I'll have a few days off or just extra padding... :) Good luck, Miss Vickie!

This will be my sixth year participating in Nanowrimo. It's a crazy, wonderful month and I can't imagine NOT throwing myself into it. I've always made it to the 50000 mark and once I made it close to 80000 in that wonderful month of November.

Nanowrimo is all about turning off that inner editor and forging ahead. You might think that writing would suffer for it (and I'm sure it does sometimes), but I find that the freedom of just-plain-writing can put your brain into a place where creativity flows.

I'm a Municipal Liaison for Nanowrimo for the first time this year - even more stress to a stressful month! Ack!!

Good luck on your November journey, Vickie, and remember there'll be lots of us along with you for the ride.
Amy

Won't be doing NaNoWriMo; have other goals to finish. So why do I feel like the kid that was scared to jump off the diving board. Waaa!

Good luck! I still haven't decided. I'm in revisions for my current WIP, but I figure, what's a month away to pound out another novel? I need to make a decision soon!