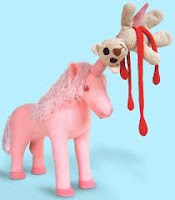 This book has been dubbed as "The Killer Unicorn Book."  Rampant, by Diana Peterfreund, her website here.

If that doesn't make you want to read it, I'm not sure what will.  Here's the blurb:


"Forget everything you ever knew about unicorns…
The sparkly, innocent creatures of lore are a myth. Real unicorns are venomous, man-eating monsters with huge fangs and razor-sharp horns. And they can only be killed by virgin descendants of Alexander the Great.
Fortunately, unicorns have been extinct for a hundred and fifty years.
Or not.
Astrid Llewelyn has always scoffed at her eccentric mother’s stories about killer unicorns. But when one of the monsters attacks her boyfriend in the woods – thereby ruining any chance of him taking her to prom – Astrid learns that unicorns are real and dangerous, and she has a family legacy to uphold. Her mother packs her off to Rome to train as a unicorn hunter at the ancient cloisters the hunters have used for centuries.
However, at the cloisters, all is not what is seems. Outside, the unicorns wait to attack. And within, Astrid faces other, unexpected threats: from crumbling, bone-covered walls that vibrate with a terrible power to the hidden agendas of her fellow hunters to – perhaps most dangerously of all – her growing attraction to a handsome art student… an attraction that could jeopardize everything." 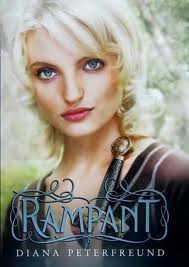 A fast paced read in which you're never quite sure what's coming next (and really, what can be better than that?).  The cast of characters are all very familiar--from the popular blond athlete to the terribly nerdy and bossy misfit to the under loved and greatly pressured Asian kid--but when plugged into a 21st Century version of Unicorn hunting nuns, they become girls you can relate to, admire, while at the same time hoping you will never cross one in the street.  Deadly?  Oh, yeah.

First sentence: You have to take the first passage for this one.  The first sentence doesn't stand alone.

"'I will never really leave,' said the unicorn.  Diamond sparkles floated from the tip of is glittering silver horn. 'I will always live in your heart.'"

I swallowed the bile rising in my throat and forced myself to continue reading.

"Then the unicorn turned and galloped away, its fluffy pink tail swinging merrily as it spread its iridescent wings to the morning sunshine."

"Every time the unicorn's lavender hooves touched the earth, a tinkling like the chime of a thousand fairy bells floated back toward the children."

Shuddering, I raised my head from the picture book to look at the rapt upturned faces of my charges.

Readers, writers, and agents frequently talk about voice.  You want a great example of voice?  Read this book.  In the first chapter you learn of Astrid great aversion to clowns.  Yes, we have a main character who is afraid--not of clowns or sharks or the dark--of unicorns because of her mother's singular obsession with the bloodthirsty animals.

This is the sort of things that drew me into the book and didn't let me go.

Beefs: I got four hours of sleep one night because I couldn't put it down.  Noooooo!  Haha, I'm completely serious.  Don't you hate when a book is so good you have to forsake your health for it? 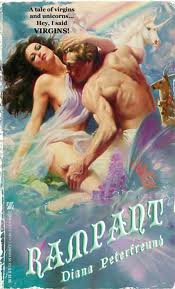 Brownie Points: Since the unicorn hunters must be virgins to retain whatever magical powers being a virgin grants them, the group of hunters, all attractive, smart, teenage girls, talk about what it means to be a virgin in this day and age.  Throughout the whole book you are invited to think about this concept.  I like books that question modern day social customs, without, of course, trying to shove it down your throat.  It's a question, after all, that teenage girls are faced with everyday, so of course they will like reading about it.

Recommendation: Read it.  Tell other people to read it.  Then read the sequel.

Want more of killer unicorns?  Diana Peterfreund has also contributed to Zombies vs. Unicorns, in which other favorite authors (Scott Westerfeld, Meg Cabot, Libba Bray) have thrown their two cents into the debate.  While not normally a fan of short stories, this book is at the top of my precariously tall stack of books to read.

Would I represent it? Yes.  I've never before heard of anyone making unicorns bloodthirsty and making a bunch of girls into unicorn slaying nuns, so, needless to say, the concept is unique.  Paired with Peterfreund's voice and story telling, this is the sort of book I would love to be able to represent.  Maybe one day I can help an author publish a book about evil squirrels or the secret life of platypus (you're the geniuses, I'm sure you can come up with something better).

Happy reading!
Posted by Vickie Motter at 8:03 AM

How about a book about widdle tiny people that ride on the backs of insects--and it's not a kid's book, but rather serious fantasy. That's what I'm writing rn ;)

I'm glad my recommendation was well received! I knew you would love Killer Unicorns... :)

You should check out Diana's other books too... they made me lose sleep even more than this one, since Sno-Isle doesn't have "Ascendant" yet. :( The other book series has four books... and I got them all at the same time! :) hehehe...