I read the back cover of this book and just had to read it. I love the idea, the plot--it's beautifully morbid in all the right ways. Hunger by Jackie Morse Kessler. 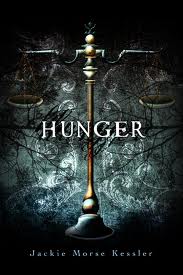 and the new Famine, one of the Horsemen of the Apocalypse.

Seventeen-year-old Lisabeth is fighting a series of demons the only way she knows how: by refusing to eat. Her cold, acerbic mother; distant father; and friends who disapprove of her and each other all trigger her inner Thin Voice, which derides food, confirms her fatness, and shames her into the control necessary to reject food. As she sinks deeper into anorexia, she summons Death, one of the Four Horsemen of the Apocalypse, who in turn assigns her a black steed and a scale and transforms her into Famine, another of the Four Horsemen. Kessler has written an unusual allegory about eating disorders, one that works on several levels. As Lisabeth gallops across the world, she witnesses examples of both gluttony and starvation. Using her newfound power, she combats famine, visits horror upon the privileged, and strives to bring balance to the world, all while ignoring the need for balance in her own life. Kessler offers a refreshingly new approach to the YA eating-disorder genre that reinforces the difficulty of conquering these diseases.

First Sentence: "Lisabeth Lewis didn't mean to become Famine." I'm usually not a fan of first sentences in which a character is introduced by name, but it's such an excellent hook that it works. Who doesn't want to keep reading after that?

Beefs: I couldn't help but imagining what this book would have been like had it been longer, for an older audience, and more in depth. As it was though, it worked, and was an excellent read.

Brownie Points: The characterizations of Lisabeth and her friends, especially her bulimic friend Tammy, were wonderfully done. Heart wrenching in every way, honest enough to be real, but written in a style that's in-your-face without pummeling-your-face-in.

Ending: As it should be. A wonderful self-discovery.

Recommendation: Teenage girls should definitely read this, especially girls with a penchant towards fantasy, because it mixes just the right amount of fantasy in with the real world to be very effective. I'm not saying this book will make an anerexic girl better; but it is a good self awareness book for all girls.

Would I represent it? I've said before that I like longer books, things much more in depth. So I'm not entirely sure what I would have done with it had I found it in my slush pile. I'd like to think I would have snatched it up, but who knows? I love the idea of girls becoming the Horsemen of the Apocalypse, so I'd love to see something like it.

I was at an SCBWI conference a few years ago, and either an agent or editor was speaking about High Concept books. She didn't say the name of the book, but she said it was about a girl who discovers she is one of the Horsemen (women?) of the Apocalypse. I am sure this must have been the book. What a great, unusual, original idea!

You really give insight as to how and why an agent might pass over a manuscript even though they love the concept of the story. It helps with knowing that when rejections come in.

Very cool review. I really dig how you break down the book and offer your perspective on the content. Very nice. Also, like Em-Musing said, it does help to see why or why not an agent passes on a possible work. Keep up the great work and happy reading.

You had me at "beautifully morbid". I'm grabbing a copy of this for myself and my little sister!

Intriguing concept. I've never been terribly interested in eating-disorder stories, but the fantastical element is unexpected. I might have to check this one out.

And as several others have mentioned, these Wednesday Reads are so helpful in figuring out not only what kind of books you like but why you like them (or don't). So useful for querying writers.

This sounds great. I'm adding it to my ever-growing list.
I love how you break down the books.

this book sounds awesome. adding it now to my birthday wish list :)

also, i really like your wednesday reads. mainly the "beefs" section. it's nice to have things in mind when i'm considering submitting my manuscript.

I just finished reading this book a couple weeks ago. I loved how the author was able to combine a serious issue with humorous writing and an unrealistic concept - and it was all believable and moving as we watched her self discovery process. I agree that it was on the short side, but the story itself seemed complete.