I'd been waiting for this book to come out forever! Okay, a few months. And now I've read it. Why was I waiting for it? The synopsis. Loved it! The idea of girls in a Dystopian future being branded at sixteen and used for sex? Oh ya, love it! 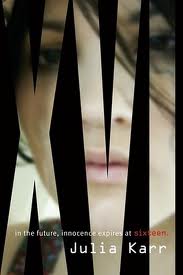 "In the year 2150, being a girl isn’t necessarily a good thing, especially when your sixteenth (read sex-teenth) birthday is fast approaching. That in itself would be enough to make anyone more than a little nuts, what with the tattoo and all – but Nina Oberon’s life has taken a definite turn for the worse. Her mother is brutally stabbed and left for dead. Before dying, she entrusts a secret book to Nina, telling her to deliver it to Nina's father. But, first Nina has to find him; since for fifteen years he's been officially dead. Complications arise when she rescues Sal, a mysterious, and ultra hot guy. He seems to like Nina, but also seems to know more about her father than he’s letting on. Then there’s that murderous ex-government agent who’s stalking her, and just happens to be her little sister’s dad."

First Sentence: ""Nina, look." Sandy jabbed me in the ribs." An okay way to start with dialogue. It's the first page that really chapters your attention, because you are immediately plunged into the dualities between Nina and Sandy--the girl who acts like a sex-teen, and the girl who abhors the practice.

Beefs: While the World Building was mostly fantastic, we never learned why the world is the way it is. What happened to make people think objectifying women like that is ok? The fact that the media now controls the government explains a little, but not enough. There were also some terms that weren't clearly explained. Maybe I missed it, but I don't know what PAV stands for, or what exactly a rapido is (some sort of pencil), or that their vehicles fly (I got that a few chapters in, but not right away when they are first mentioned).

Recommendation: Read it if you like the genre/concept. It's a good read, definitely not a waste of time.

Would I represent it? Probably based on the concept alone, haha.

Happy reading!
Posted by Vickie Motter at 9:16 AM

I've heard from a few people now that the lack of explanation for the way the world is in XVI bugged them. I've been wavering on picking it up because of that. But I also keep hearing that it's a good read so it's going on my list of books to buy! Thank you for the review.

Hmm...I remember watching Julia talk about her book on one of those live internet feeds from some moose lodge in Gosh knows where. I remember LOVING the cover. The concept does sound cool and I will probably read it just to see how it plays out, but it does bother me that, as you say, we don't get to discover how or why things became the way they did or why it has been permitted to remain that way when it's such a cruel way to treat women. Thanks for the review!

I read the synop a while back, too, and have been curious for when this comes out. Based on your review, I know the same things will drive me nuts--I like to know all those things, understand why, especially the background on why women are treated as such--BUT it sounds like the book meets the expectations and excitement of the synop for the most part. Thanks for your review--I always look forward to these :-)

I picked this up recently (also love the cover), it's now in my To-Read pile. I tend to poke holes in any future dystopian story, but once I've poked, I try to let it go and just enjoy the story.

This, along with WITHERED, is one of the two books I almost picked up on my last Barnes & Noble trip and then didn't because something else caught my eye. Definitely on the top of my to-read list, though!

Interesting. Good review. I've not heard of it before or the author.
I like your Freudian slip 'chapters your attention' BTW ;O)

I saw this on the shelf this week while browsing the aisle at Barnes and Noble. It looked fabulous but I ended up going with something else... now I almost wish I hadn't! Oh well... I'll take another good recommendation any day!