The Liar Society by sisters Lisa and Laura Roecker (website here) was a fabulous read. One of the things that makes this book unique is clearly stated on the first page. This plays into voice, plot, and character development: the main character has pink hair. Some girls in the throes of grief cut their hair off, or dye it black. Kate Lowry dies her hair pink. Right there, that's a character I can like. 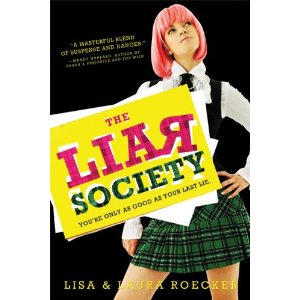 
Since when do the dead send emails?
Kate Lowry's best friend Grace died a year ago. So when she gets an email from her, Kate's more than a little confused.

Now Kate has no choice but to prove once and for all that Grace's death was more than just a tragic accident. She teams up with a couple of knights-in-(not-so)-shining armor-the dangerously hot bad boy, Liam, and her lovestruck neighbor, Seth. But at their elite private school, there are secrets so big people will do anything to protect them-even if it means getting rid of anyone trying to solve a murder...

First Sentence: "Her email didn't move or disappear or do any of the creepy things I'd expect an email from a ghost to do." You'll hear over and over again that your opening scene needs conflict, something that occurs that grabs our attention and allows us to watch the main character struggle through. This is Kate's conflict. What do you do with an email from a ghost? It's riveting to say the least.

Beefs: I'm actually going to complain about something a little odd here. Before reading the book, I read some other reviews. Many complained about the amount of Latin used, said that it bogged down the book and overpowered the plot. I would like to say, "Um, what are you talking about?" The use of Latin was well done and explained perfectly so that all of us who don't know a lick of Latin could follow along. And yes, the Latin was necessary to the plot.

Brownie Points: I've already mentioned Kate's pink hair, so I guess I need to find something else. Easy peasy. Inner conflict. Even a year after Grace's death, Kate is in turmoil over losing her best friend (two best friends really, since the other no longer talks to Kate). This is real. Tragic. And done so well. Everything in her life connects back to Grace. What would Grace do? What would Grace say? Why should I be happy/flirting with super cute boy when Grace is dead?

Recommendation: Read it. It's mystery, suspense, contemporary, little bit of love but it isn't dominating, deals with death, riddled with secrets. It's actually much heavier than the title suggests, but not "I'm carrying the world on my shoulders, angst driven" heavy.

Would I represent it? Most definitely. Throw some more mysteries my way. I remember why I read so many of them when I was a kid.

And, because I happen to have it, a picture of me in a pink wig. I'm very excited about having more excuses to wear my pink wig now!


Happy reading!
Posted by Vickie Motter at 12:00 AM

I love how you break down a story.

I LOVE the pink wig. You know, though, that's how I'm going to picture you from now on.

I really liked this book, too. And I love the sisters' online presence and marketing campaign.

There's an upcoming book by Emily Murdoch, Best Friends Forever, which shares the theme of having dead best friends emailing.

I find it interesting how two books can be seem so similar, but be completely different.

Want to read this book, but our library system STILL doesn't have it. (Just another one of the many problems of living in an almost bankrupt state...)

Funny, I read a different review of this book, or maybe an interview of the authors (?) and wasn't interested, but after reading your review, I'm going to check it out. Thanks for the suggestion.

Great analysis, I've seen a few reviews but none mentioning Latin - that makes me want to read it :)

I find it really interesting that you loved the pink hair and say it was a big thing - because I remember the authors admitting being freaked out about the cover when they first saw it - because the protagonist didn't have pink hair! It was something they added afterwards to sync with the cover... funny how publishing works sometimes.

I have a secret ambition to one day dye my hair pink... it'll probably never happen.

I love your Wednesday posts.

And FWIW, I think the purple top was the perfect compliment to your pink wig.:)

Yes!! I LOVE the pink wig! SO SO cute. And excellent review of The Liar Society. :D

Yay to supporting appropriate use of text (Latin in this case) that may lengthen a paragraph, but allows readers to experience the way words connect worlds, as well as action. This novel sounds great.