Wednesday Reads: The Sky is Everywhere 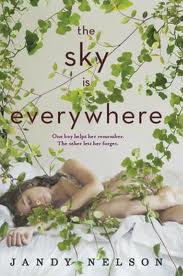 The Sky is Everywhere by Jandy Nelson. Grief, true love, betrayal, self discovery. It's the latter that grabbed me and didn't let me go. That and VOICE. Page one, you connect with Lennie. You know what she's thinking, what she values, and you empathize with her.

I used this cover rather than the cover on my copy (the one with the heart) because I like it better. It's way more Lennie. But while doing the Google Image search, I came across dozens of beautiful images of covers, captions, quotes. I won't bombard your senses with them all, so if you have time (make time) Google Image search "The Sky is Everywhere."

But when Bailey dies abruptly, Lennie is catapulted to center stage of her own life—and, despite her nonexistent history with boys, suddenly finds herself struggling to balance two. Toby was Bailey's boyfriend; his grief mirrors Lennie's own. Joe is the new boy in town, a transplant from Paris whose nearly magical grin is matched only by his musical talent. For Lennie, they're the sun and the moon; one boy takes her out of her sorrow, the other comforts her in it. But just like their celestial counterparts, they can't collide without the whole wide world exploding.


"Gram is worried about me. It's not just because my sister Bailey died four weeks ago, or because my mother hasn't contacted me in sixteen years, or even because suddenly all I think about is sex. She is worried about me because one of her houseplants has spots.
Gram has believed for most of my seventeen years that this particular houseplant, which is of the nondescript variety, reflects my emotional, spiritual, and physical well-being. I've grown to believe it too."

You know the key players, that Lennie has a lot going on in her life, and that her life is rather quirky. It was this first page that made me want to read this book (which is way I've given them to you).

Beefs: While I completely bought the ending (it was believable and perfectly fit with the tone of the novel), I couldn't help but leave the novel with the taste of teenage romance in my mouth. Good or bad depending on your mood of course. Again, I'm not saying the ending was bad, or that it's not worth the read (it is! It is!!), but the idea of happily ever after at 17 isn't always true to life.

Brownie Points: Besides the VOICE, what I liked was the use of Wuthering Heights. Gasp! Did I just say that?! Some of you regular readers may remember my condemnation of using Wuthering Heights in other books (I actually strongly dislike it. I've read it twice and will read it again in the future, but I cannot understand the appeal. But we all have our preferences), so I hope I'm not being a hypocrite now. What's interesting about using it in this book, is that it is a constant reference throughout. It's not just a passing "my favorite book of all time!" It really is Lennie's favorite book of all time. She's read it twenty-some times and constantly refers to it when thinking about romance. I won't give the ending away, but I wholeheartedly LOVED what Lennie did to her well worn and loved copy.

Brownie Point Two: Lennie has this delightful quirk/need/compulsion to write. She writes on everything: books, napkins, trees, her shoes. But she discards things as soon as she writes on them, and it's through these that we get another glimpse into her soul. Unique and beautifully done.

Recommendation: If for nothing else, read it to see the most outstanding example of VOICE. Every character is well rounded and crafted with care.

Would I represent it? Yes, yes, yes!

Thank you for the recommendation. Can't wait to read it.

I really love that cover, too. Much more captivating.

My favorite part of this book was also the voice. Definitely worth reading just for that, especially if you're a writer and you're looking for a good study.

I also felt the plot drifted too much into "cliche' romance" toward the end. The way it had been set up, I was hoping for more closure with the Mom issue. I know that in real life you can have closure without anything concrete happening, but in fiction, I expect more confrontation. If that makes sense. It felt like a missed opportunity, especially since the book was rather short. It seemed there was plenty of room to explore that particular aspect more.

But, despite that, I still recommend reading it. However, be warned: it'll make you cry.

I'll have to look for this book. Sounds like a good read. As a writer, I think finding the character's voice to be one of the most difficult aspects. I love to read books where the author has nailed it.

Wuthering Heights. *shudders* A soppy story in which (to my mind) the characters actions often make no sense. Really, really, really didn't like the book.

This was a lovely read. As you said, such a strong voice. Also, she has an easy poetic quality to her phrasing. Great recommendation!

I usually stick the the fantasy genre, but this review really makes me want to pick up this book....

This is a good book.

After reading your review, I got this from the library and could not put it down. Really good. I'm not a big fan of Wuthering Heights either (I read it after reading Twilight), but I can appreciate the character's love of the book, and how Jandy incorporated it into the story.

Love this book so hard.