The Summoning by Kelley Armstrong. 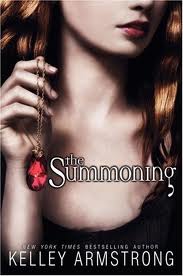 Chloe Saunders sees dead people. Yes, like in the films. The problem is, in real life saying you see ghosts gets you a one-way ticket to the psych ward. And at 15, all Chloe wants to do is fit in at school and maybe get a boy to notice her. But when a particularly violent ghost haunts her, she gets noticed for all the wrong reasons. Her seemingly crazed behaviour earns her a trip to Lyle House, a centre for disturbed teens.
At first Chloe is determined to keep her head down. But then her room mate disappears after confessing she has a poltergeist, and some of the other patients also seem to be manifesting paranormal behaviour. Could that be a coincidence? Or is Lyle House not quite what it seems…? Chloe realizes that if she doesn’t uncover the truth, she could be destined for a lifetime in a psychiatric hospital. Or could her fate be even worse…? Can she trust her fellow students, and does she dare reveal her dark secret?

First Sentence: "Mommy forgot to warn the new babysitter about the basement." The prologue is delightfully creepy, centering around Chloe's lost memory from twelve years before. Yes, about a basement and the things that go bump in the night.

Brownie Points: When I saw that it was about some girl that could talk to ghosts, I was hesitant to pick it up. I'm not a huge fan of ghost stories. However, I realized that it wasn't about the ghosts, but about the girl. So I picked it up. (Might have helped that it took place in a home for troubled teens; the whole insane asylum aspect intrigued me.)

Brownie Point number two: Because I wouldn't be me without mentioning it. Are you guys sick of me talking about VOICE? (And putting it in caps?) The main character not only had the inner conflict of "am I crazy?" but had her own passions and ways of thinking. She wants to be a movie director when she grows up, so what is her inner monologue like? In stressful situations or in scary cramped places, she begins to "direct" in her head, which takes the world as she sees it out of reality and into a frame in which she can deal with it. And what person doesn't do that?

Recommendation: If for nothing else, the characters were really well developed. Here's a host of misfits who really are misfits, especially in their own skin. And I loved how the pretty boy who you'd think would take center stage, didn't really.

I'm definitely going to be reading more of Armstrong's books. You should too. She has unique plot and great voice.

Would I represent it? The voice was slightly too young for me, but I'd definitely take a serious look at something like it.

The first sentence gave me shivers, which means I'm totally buying this! Thanks for featuring it. I don't know how it escaped my attention until now!

I've read the entire series and absolutely loved it!