Under Wraps is the first book in The Underworld Detection Agency Chronicles by Hannah Jayne. It's an adult Urban Fantasy. You've got the usual werewolves and vampires, but also a smattering of trolls, dragons, and witches. The cover is very bad a**, but in actuality, this is more like a paranormal cozy mystery with a dark edge. The tone if very fun and the characters are hilarious. Definitely worth the read. 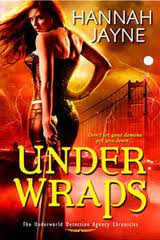 As a human immune to magic, Sophie Lawson can help everyone from banshee to zombie transition into normal, everyday San Francisco life. With a handsome werewolf as her UDA boss and a fashionista vampire for a roommate, Sophie knows everything there is to know about the undead, the unseen, and the uncanny. Until a rash of gruesome murders has demons and mortals running for cover, and Sophie finds herself playing sidekick to detective Parker Hayes. Dodging ranging bloodsuckers, bad-tempered fairies, and love-struck trolls is one thing. But when Sophie discovers Parker isn't what he seems, she's only got one chance to figure out whom to trust. Because an evil hiding in plain sight is closing in...and about to make one wisecracking human it means to ultimate power.

First Sentence: "This was why I didn't do magic." We get plunged directly into a hilarious stand off of dragon vs vampire with Sophie smack dab in the middle, and also get immediately into her voice.

Brownie Points: World building. The demon world lives "under" the normal one and is populated with all manners of creatures with all their own personalities. Sophie is a human but she has enough Seer blood in her to make her immune to magic, which means she can see through the veils into the demon world. A great maker of good world building, is the language that comes with it. And the creatures in this world all have their own; I found it especially hilarious when Sophie's vampire roommate calls her a "breather."

Recommendation: If you love Urban Fantasy or are looking for a great, light with an edge, read, then read this. Book 2, Under Attack, comes out in November 2011.

Would I represent it? Yes! I am looking for Urban Fantasy and would love a mix of downright dark and upbeat light.

How cool! I love the synopsis. And I know we shouldn't judge books by their covers, but holy cow! That one rocks! Thanks for the recommendation, Vickie.