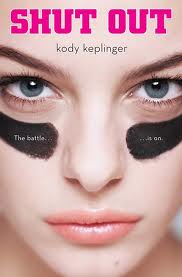 Kody Keplinger strikes again! Remember her debut novel, The Duff? If you enjoyed that, and you love witty, fun, while serious reads, check out her new book, Shut Out.


Most high school sports teams have rivalries with other schools. At Hamilton High, it's a civil war: the football team versus the soccer team. And for her part,Lissa is sick of it. Her quarterback boyfriend, Randy, is always ditching her to go pick a fight with the soccer team or to prank their locker room. And on three separate occasions Randy's car has been egged while he and Lissa were inside, making out. She is done competing with a bunch of sweaty boys for her own boyfriend's attention.

Lissa decides to end the rivalry once and for all: She and the other players' girlfriends go on a hookup strike. The boys won't get any action from them until the football and soccer teams make peace. What they don't count on is a new sort of rivalry: an impossible girls-against-boys showdown that hinges on who will cave to their libidos first. And Lissa never sees her own sexual tension with the leader of the boys, Cash Sterling, coming.

First Line: "There is nothing more humiliating than being topless in the backseat of your boyfriend's car when someone decides to throw an egg at the windshield."

Brownie Points: Keplinger has quite the talent when it comes to writing and discussing often taboo subjects such as sex. That and she has really sexy libraries (library scenes, library boys... ahhhh libraries).

Recommendation: I highly suggest both of Keplinger's books for teens, boys if you can get them to read it, especially if they're feeling the pressure to have sex, are having sex, thinking about having sex... or, you know, what a good book to read.

Would I represent it? With a voice like that and an ability to put new spins on old topics? Heck yes!

The cover model is the spitting image of Liv Tyler.

I am listening to the audiobook and love it. I love the first line.

LOL on first line! This one sounds like a very entertaining read. Thank you or sharing, Vickie.

Wow, a modern-day YA take on Lysistrata! It's about time, and perfect placement. I saw this book on another website, too... Must. Buy. Now.

I say many thanks to Mr. admin website I read this, because in this website I know a lot of information information that I did not know before his
Pengobatan Penyakit Kulit Herbal
Obat Infeksi Kulit
Cara Menghilangkan Flek Paru Paru