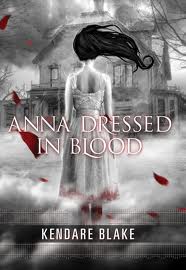 Anna Dressed in Blood by Kendare Blake. I was pleasantly surprised with this one. Boy narrators are really tricky to get right (I don't like it when they're so over the top boy--gross, sex obsessed--that they don't appeal to a wide range of readers), but Cas was very relatable. Confident in himself and he knows how to blend into new places to get a job done--then of course we watch as he encounters something new and has to find his way through it while staying true to himself. (by the way, I'm in love with the cover--there is just something about black and white and red that gets me every time)


Cas Lowood has inherited an unusual vocation: He kills the dead.
So did his father before him, until he was gruesomely murdered by a ghost he sought to kill. Now, armed with his father's mysterious and deadly athame, Cas travels the country with his kitchen-witch mother and their spirit-sniffing cat. Together they follow legends and local lore, trying to keep up with the murderous dead—keeping pesky things like the future and friends at bay.
When they arrive in a new town in search of a ghost the locals call Anna Dressed in Blood, Cas doesn't expect anything outside of the ordinary: track, hunt, kill. What he finds instead is a girl entangled in curses and rage, a ghost like he's never faced before. She still wears the dress she wore on the day of her brutal murder in 1958: once white, now stained red and dripping with blood. Since her death, Anna has killed any and every person who has dared to step into the deserted Victorian she used to call home.
But she, for whatever reason, spares Cas's life.

First Line: "The grease-slicked hair is a dead giveaway--no pun intended." Cas is so matter of fact about death and ghosts, it eases you right into the supernatural without making a huge deal out of it. Plus, the beginning scene is a huge Save the Cat moment, while staying true to his character.

Brownie Points: I'm going to give it to Anna actually. A ghost, by the way. Blake does a fabulous job at making Anna so human, but we never once forget that she is, in fact, a ghost.

Recommendation: If you think all paranormals and supernaturals have gone the way of Twilight, guess again. And read Anna. I think you'll be suckered in.

Would I represent it? I do have a ghost story on my list already, however if it's unique and unlike anything I'd ever read (while being everything I love in a ghost story) I'd definitely take a look. Possibly a tall order, but that's why I love writers you know. As for Anna, if she had been in my inbox, I'd definitely would have snatched it up.

Awesome post Vickie. I've become an avid stalker of yours ever since you picked up my CP's MS - How to Date A Nerd. :) I wish I could have participated in Cupid's contest, but my MS is a few weeks away from being polished. I hope you'll still be around to send to :)
And I'm super kean to read Anna now, thanks for the review ;)

Just bought this yesterday! Happy to hear another good review.

I have this sitting by my bed... think I will read this next. Yay Save the Cat moment!

Read it and loved it. I'm pretty sure Kendare Blake and I were seperated at birth.

I definitely enjoyed this one. One of the best I read last year.

Loved this book. The sequel wasn't quite as amazing, but wrapped up the story nicely.