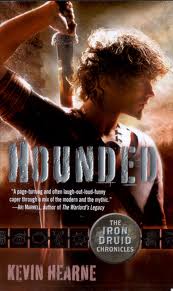 
Atticus O’Sullivan, last of the Druids, lives peacefully in Arizona, running an occult bookshop and shape-shifting in his spare time to hunt with his Irish wolfhound. His neighbors and customers think that this handsome, tattooed Irish dude is about twenty-one years old—when in actuality, he’s twenty-one centuries old. Not to mention: He draws his power from the earth, possesses a sharp wit, and wields an even sharper magical sword known as Fragarach, the Answerer.

Unfortunately, a very angry Celtic god wants that sword, and he’s hounded Atticus for centuries. Now the determined deity has tracked him down, and Atticus will need all his power—plus the help of a seductive goddess of death, his vampire and werewolf team of attorneys, a sexy bartender possessed by a Hindu witch, and some good old-fashioned luck of the Irish—to kick some Celtic arse and deliver himself from evil.

First Line: "There are many perks to living for twenty-one centuries, and foremost among them is bearing witness to rare birth of genius. It invariably goes like this: Someone shrugs off the weight of his cultural traditions, ignores the baleful stares of authority, and does something his countrymen think to be completely batshit insane. Of those, Galileo was my personal favorite. Van Gogh comes in second, but he really was batshit insane."

I had to give you the full first paragraph. Atticus has a really fun, witty, at times wry, at times in your face, voice. It's always consistent, and I felt immediately connected to Atticus, despite his experience and gender. (Sometimes older beings can come off really superior and *not nice word*)

Brownie Points: I already mentioned the doggy. Who has his own awesome voice, combination silly dog and intelligent being. And yes, I said the dog has a voice. Don't worry, it isn't wacky. It ties in with Atticus's powers and works really well.

Also, I love the world. It's complex and involves names, gods, powers, and names that I've never heard of and cannot pronounce, but I was never lost. Plus, so many different myths and gods are pulled in and introduced you can't help but laugh out loud and marvel at the intricacy of it all.

Recommendation: For readers looking for a fantastic UF but a change of pace, plus a complex world and great characters. For writers, if you have a male voice that readers are unable to connect with--either too masculine for a female audience, or too feminine for a male character--you must read this.

Would I represent this? Yes! I'd love a male-centered, or even partial male-centered UF. The key to a really great UF is the world building. Must. Be. Done. Amazingly.

Oh, that one has been on my TBR list for a couple of months now. It sounds so good! I better get to it soon!

I adore this series. IMO, one of the best that came out last year.

Sounds like a fun story. And while I hadn't thought about it, I just realized I haven't read much UF that didn't have a female MC.

You sold me. I am very curious what the doggie voice sounds like too.