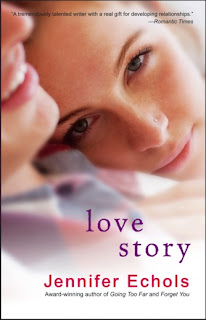 Love Story by Jennifer Echols. I decided a month or two ago that I would read as many Jennifer Echols books as I can. I didn't get all that far (I had to make sacrifices for the sake of the leaning tower of TBRs), but I'm glad I at least read Love Story. Honestly, I hadn't read the back cover when I decided to read it, but I did right before I started reading. I couldn't open the cover fast enough. Then I started reading. And I didn't stop. I almost read it all in one sitting, but that elusive thing called sleep made me put it down. It was funny, surprising, and so, so true. Beautiful character development.


SHE'S WRITING ABOUT HIM. HE'S WRITING ABOUT HER. AND EVERYBODY IS READING BETWEEN THE LINES.
For Erin Blackwell, majoring in creative writing at the New York City college of her dreams is more than a chance to fulfill her ambitions--it's her ticket away from the tragic memories that shadow her family's racehorse farm in Kentucky. But when she refuses to major in business and take over the farm herself someday, her grandmother gives Erin's college tuition and promised inheritance to their maddeningly handsome stable boy, Hunter Allen. Now Erin has to win an internship and work late nights at a coffee shop to make her own dreams a reality. She should despise Hunter . . . so why does he sneak into her thoughts as the hero of her latest writing assignment?
Then, on the day she's sharing that assignment with her class, Hunter walks in. He's joining her class. And after he reads about himself in her story, her private fantasies about him must be painfully clear. She only hopes to persuade him not to reveal her secret to everyone else. But Hunter devises his own creative revenge, writing sexy stories that drive the whole class wild with curiosity and fill Erin's heart with longing. Now she's not just imagining what might have been. She's writing a whole new ending for her romance with Hunter . . . except this story could come true.


First Sentence: "Captain Vanderslice was something of an ass." The first few pages are Erin's first submission to her creative writing class, which actually shows so much about her. I warn caution if ever you try to do this, very tricky, but when it's done right, it's to great effect.

Brownie Points: Like I said: character development. Also, use of short stories within a larger story--those are plain hilarious. I actually laughed out loud several times reading this book. I connected really well with Erin--probably better than I have with almost any other Echols character... not sure what that says about me.

Recommendation: If you haven't explored YA "romantic drama" or really any Jennifer Echols, I highly suggest it. So highly, if I had the book in my hands and we met on the street, I'd force you to read it right then and there and stare at you the entire time. Also, that sounds really fun. And creepy.

Would I represent it? Consider me looking for romantic drama. Officially. The trick though, is spectacular character development. There's no swashbuckling, so your characters can't hide behind fancy footwork.

Happy reading!
Posted by Vickie Motter at 8:14 AM

I loved this book, but I was so mad when it ended. I wanted so much more.

Sounds like a great book. I'll have to look for it. I'm almost done with the one I'm reading now. Thanks Vickie.

This sounds so good! It may be just what I need to break up the streak of paranormal novels I've been reading. Thanks for the recommendation.

I love Jennifer Echols' books. I came across this one and her e-book, The One That I Want, the other day and thought both sounded good. (Though I'm really interested in the story-within-a-story element of Love Story.) I'm in the middle of reading The Statistical Probability of Love at First Sight (which is really good so far!) but after that I think the next romance I'll pick up is this one. I'm so happy to hear it's as good as her other books!

This was my first Jennifer Echols and I *loved* it SO much. I thought interspersing the actual story with the short stories that actually reflected back on incidents in the two main characters' lives was very clever.

I'm looking forward to her other books.

I’ve nominated you for a Kreative Blogger award on my blog. Here’s the link http://theliterarymom.wordpress.com/2012/01/05/kreative-blogger-award/ Have a great new year!

This one is sitting on my bookshelf unread. Why haven't I opened it yet?!

I added this to my to-reads on Goodreads. I have also become a Jennifer Echols aficionado (reading Forget You and The One That I Want recently). I look forward to your future reviews of her books!