Wednesday Reads: Lola and the Boy Next Door

Normally, I don't review sequels or second books in series, but Lola really isn't a sequel. It's a companion novel to Anna and the French Kiss (you may remember my review here), and Anna is in it as minor-ish character. But Lola stands on her own. In all her shining, glittery glory. Stephanie Perkins is officially one of my favorite authors. 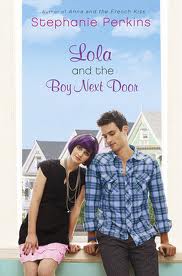 Oh, and I happened to like Lola more than Anna. Not that I didn't enjoy Anna. I did enjoy my 300 page trip to Paris. I was just able to connect with Lola way more. There's a scared teenage girl locked inside of me who really wants to wear crazy clothes and wigs every day.


Budding designer Lola Nolan doesn't believe in fashion . . . she believes in costume. The more expressive the outfit - more sparkly, more fun, more wild - the better. But even though Lola's style is outrageous, she's a devoted daughter and friend with some big plans for the future. And everything is pretty perfect (right down to her hot rocker boyfriend) until the dreaded Bell twins, Calliope and Cricket, return to the neighborhood.

When Cricket - a gifted inventor - steps out from his twin sister's shadow and back into Lola's life, she must finally reconcile a lifetime of feelings for the boy next door.

It's not a book about genies. It's actually a very straightforward way to start the book, but Lola's voice immediately shines through. And here's what I mean by that: if you mix a bunch of first pages together, anyone who has an inkling of an idea who Lola is, will not mistake the first page for another character. Here's more of the first page to give you an idea.

"I have three simple wishes. That's really not too much to ask.
The first is to attend the winter formal dressed like Marie Antoinette. I want a wig so elaborate it could cage a bird and a dress so wide I'll only be able to enter the dance through a set of double doors. But I'll hold my dress high as I arrive to reveal a pair of platform combat boots, so everyone can see that, under the frills, I'm punk-rock tough."

The next two wishes briefly touch on the two major conflicts of the novel (her neighbors and her boyfriend). The first page is very successful in laying out voice and conflict, being just enough in-your-face to emulate Lola and get the plot rolling, without being Telling.

Brownie Points: Well, the entire book. Besides that?

Lola's parents. They're gay. But here's what I love about this. It's not a novel about having gay parents. She just happens to have loving parents who don't always agree with her choices but allow her to live her own life--and they just happen to be two men. Plus, she lives in San Francisco (just like in Anna, Lola is very successful with setting as a character), which was a great choice for setting. If it'd been set in a small town, not only would Lola be seen as more eccentric, but her parents might have been an issue. It's done beautifully.

Would I represent it? Yes, yes, yes! What have I been talking about? Character. Plot. Setting. It's all golden.

Happy reading!
Posted by Vickie Motter at 9:10 AM

Email ThisBlogThis!Share to TwitterShare to FacebookShare to Pinterest
Labels: book review, Fuel Your Writing, Lola and the Boy Next Door, Stephanie Perkins

I fell in love with Anna and this book has been on my TBR list for a long time. I think it's time I moved it to the top.

This book shines, as does Anna. Stephanie Perkins characters jump off the page as if they were real. I just love her books!

I fell in love with the writing of Stephanie Perkins while reading Anna~ it was so honest and refreshing. Now you've got me SO excited to read Lola! Thanks for the review :)

OK, it's on my list! I just read Anna a few months ago and really liked it. I was put off by the covers at first (a little to "teen" for me, not a teen) but I hear so often how great Perkins' books are, I had to read it.

And to be fair, the covers are perfect for the stories. I just have to deal with potential fallout from coworkers who don't understand what Young Adult even means.

I don't think anyone writes "longing" better than Stephanie Perkins. I loved Lola even more than Anna, too. Love. :o)

I still love Anna more... but Lola is close behind :)

I've got to find them both. I can't believe I haven't read either!