Wednesday Reads: The Girl in the Steel Corset 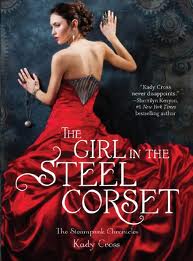 Besides my first thought (ouch! that's gotta hurt), I was very excited to find another amazing Steampunk. The Girl in the Steel Corset by Kady Cross.


In 1897 England, sixteen-year-old Finley Jayne has no one…except the "thing" inside her.
When a young lord tries to take advantage of Finley, she fights back. And wins. But no normal Victorian girl has a darker side that makes her capable of knocking out a full-grown man with one punch….
Only Griffin King sees the magical darkness inside her that says she's special, says she's one of them. The orphaned duke takes her in from the gaslit streets against the wishes of his band of misfits: Emily, who has her own special abilities and an unrequited love for Sam, who is part robot; and Jasper, an American cowboy with a shadowy secret.
Griffin's investigating a criminal called The Machinist, the mastermind behind several recent crimes by automatons. Finley thinks she can help—and finally be a part of something, finally fit in.
But The Machinist wants to tear Griff's little company of strays apart, and it isn't long before trust is tested on all sides. At least Finley knows whose side she's on—even if it seems no one believes her.

First Line: "The moment she saw the young man walking down the darkened hall toward her, twirling his walking stick, Finley Jayne knew she'd be unemployed before the sun rose. Her third dismissal in as many months."

Great first line. And yes, I gave you second as well because they made the paragraph. But just from the first-- intrigue.

Beefs: There was one line that broke me from the novel, otherwise I was in it and dedicated to the story; and the line reminded me of the Scooby Doo episodes when the bad guy would say "I would have gotten away with it if it weren't for those meddling kids!" Not so much a beef as I had to share my moment of hysterical laughter before diving back in to our band of misfits.

Brownie Points: go to the Steampunk elements. Wonderfully done. Painted the world really well, something that was both familiar and foreign. Plus I love a little Steampunk mixed with paranormal.

Recommendation: If you've never read Steampunk before, this is an excellent one to start with. If you love Scott Westerfeld's Steampunk series, you'll love this as well. If you just want a good YA read, read it.

Would I represent it? Uh, yeah. I totally would. And I am looking for YA steampunk (more along the lines of Cross or Westerfeld's steampunk series rather than Cherie Priest's series).

Email ThisBlogThis!Share to TwitterShare to FacebookShare to Pinterest
Labels: book review, Kady Cross, The Girl in the Steel Corset

I just started this book as well and think she's done a great job! I don't think I've reached the point you mentioned, but I'll see if I have the same reaction.

What a beautiful cover! And yeah, ouch. I have Westerfeld on my list and this one looks like a great read too! Thanks.

Wow, I do like that first line! I haven't gotten into steampunk yet....but this sounds pretty good!!

LOL @ ouch...I use steel boning in corsets I sew so it didn't seem that odd to me until I thought about it! This sounds like a really fun read--thanks!

Great first line because it builds tension and suspense! It makes me want to read more of the story.

I say many thanks to Mr. admin website I read this, because in this website I know a lot of information information that I did not know before his
Obat Kram Otak
Obat Sistem Kekebalan Tubuh
Obat Tradisional Benjolan Di Tangan
Kumpulan Artikel Mengenai Kesehatan Dan Kebugaran