Wednesday Reads: The Girl of Fire and Thorns 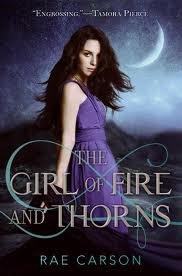 The Girl of Fire and Thorns by Rae Carson is a debut novel, genre is YA fantasy. It comes out September 20, 2011. Make sure you get a copy.


Once a century, one person is chosen for greatness.
Elisa is the chosen one.
But she is also the younger of two princesses, the one who has never done anything remarkable. She can’t see how she ever will.
Now, on her sixteenth birthday, she has become the secret wife of a handsome and worldly king—a king whose country is in turmoil. A king who needs the chosen one, not a failure of a princess.
And he’s not the only one who needs her. Savage enemies seething with dark magic are hunting her. A daring, determined revolutionary thinks she could be his people’s savior. And he looks at her in a way that no man has ever looked at her before. Soon it is not just her life, but her very heart that is at stake.
Elisa could be everything to those who need her most. If the prophecy is fulfilled. If she finds the power deep within herself. If she doesn’t die young.
Most of the chosen do.

First Line: "Prayer candles flicker in my bedroom. The Scriptura Sancta lies discarded, pages crumpled, on my bed. Bruises mark my knees from kneeling on the tiles, and the Godstone in my navel throbs. I have been praying--no, begging--that King Alejandro de Vega, my future husband, will be ugly and old and fat." That's the first paragraph, and I had to restrain myself from giving you the whole page. Carson manages the right amount of voice and information without being over the top or an info dump (tricky in fantasy).

Beefs: Actually, I wasn't super thrilled to read it based on the description, cover, and title (all good, of course, but I'm not sure if I would have picked it up off the shelf--thanks Carol!!!). But I was hooked (line and sinker) after page one.

Brownie Points: Voice and character (and plot and supporting characters and world building and ending). What the synopsis does not tell you is about who Elisa really is (good thing too, putting all her traits on the back cover would have sounded gimmicky to me and probably would have turned me off). Elisa is a fat, lazy princess (who should be in Overeaters Anonymous) who is destined for greatness but does nothing with her life except pray and eat. The character arch is so well done, and I felt such a kinship with Elisa throughout the entire novel.

Recommendation: Fantasy has a habit of being very heavy (Game of Thrones for example), but this novel manages to capture everything good about both the Fantasy and YA genres and meld into one terrific read that is neither too long, too short, or too heavy. Even if you don't like fantasy, I highly recommend it.

Would I represent it? I'm restraining from using ridiculous font that is sparkly and big and changes color, and maybe screams at you with trumpets. It would read YES.

It's possible that this is one of my favorites books I've read all year (if not in the number one spot).

I am currently looking for fantasy.

Email ThisBlogThis!Share to TwitterShare to FacebookShare to Pinterest
Labels: book review, Rae Carson, The Girl of Fire and Thorns

The Girl of Fire and Thorns. First, I like that title. And the covers....very nice. :)

OMG, I know, this book is FABULOUS. I've been recommending it to everyone I know (LOL).

I absolutely adored Elisa. I loved that she was flawed and not perfect.

Thanks for the recommendation, Vickie! I'll be sure to check it out when it comes out next month.

Sounds like a good one. I love how you break it up and share your thoughts on each individual part.

I've been considering this book for a while, honestly the description didn't hook me, but your description of Elisa now has me very intrigued. I will definitely be checking this out.

I say many thanks to Mr. admin website I read this, because in this website I know a lot of information information that I did not know before his
Obat Kram Otak
Obat Sistem Kekebalan Tubuh
Obat Tradisional Benjolan Di Tangan
Kumpulan Artikel Mengenai Kesehatan Dan Kebugaran