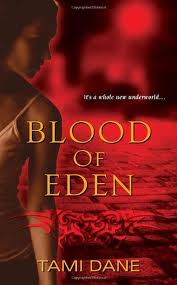 Second Wednesday Read of the year! So far I'm sticking to my New Year's resolution. Every other week is an adult book. This week is a quirky Urban Fantasy. It is adult, but the protag is at that age just above New Adult--but she is still in college, so call it what you will. I call it fun. Blood of Eden by Tami Dane.


Sloan has a sky-high IQ, a chaotic personal life, and a dream: to work for the FBI. Her goal is within reach until an error lands her with the FBI's ugly stepchild: the new Paranormal Behavioral Analysis Unit. She'll get to profile criminals, but the pool of suspects is a little more...diverse. Yet even as Sloan tackles her first case--a string of victims, all with puncture wounds to the neck--she can't silence her inner para-skeptic.

To catch the killer she'll have to think like one. That means casting aside her doubts, and dealing with the bizarre nightmares that started with the job. But the strangeness is only beginning, as Sloan pieces together the shocking truth about a case that's more personal than she ever would have guessed.

First sentence: "Rotten eggs and sulfur. Oh, the sweet stench of home." And she doesn't live in hell. Her roommate loves to experiment in their kitchen, hence the smells. I love the roommate by the way. We're quickly introduced to both her and the mother before we get to the job part--it's a great introduction and shows us so much about Sloan before we get to the paranormal stuff. Plus it's hilarious. Learn from this opening.

Brownie Points: Rather than the protag being thrust into a paranormal world in which she has to fight her attraction to a sexy vampire or werewolf, Sloan stays pretty firmly rooted in the human world. She's on a team of human FBI agents tracking down the paranormal. But the branch of the FBI is brand new so none of the usual rules of team hierarchy apply. They're all figuring it out together. Which makes for great opportunities for Sloan to be part of the team and action while she's still an intern. The reason this is a brownie point is because it's different. The entire team is learning about the paranormal together--most of them begin as skeptics and only three-quarters through are they all actually convinced of the paranormal.

Oh, I'd be remiss if I didn't mention Sloan's mother. She's my favorite character. Hands down. If you have an insane/paranoid/overprotective parent in your WIP--or you want to read one--check this out because it's done flawlessly.

Recommendation: For readers who like a little quirk and romance in their Urban Fantasy without going cozy or full-on romance. For ParaRom readers looking to expand into UF without going cold turkey on the romance.

Would I represent it? In a heart beat. I do love cozy paranormals, dark Urban Fantasy, and full-on ParaRom. But I especially love when they all blend into a delightful mix.

I've got a pretty good handle on what a cozy mystery is, but I am not sure about "cozy paranormal." Does this mean a paranormal that downplays violent and sexual content? Can "cozy" be put in front of any genre in this way? Am I way off? Sorry about the multi-part question, but I've been curious about the term and never saw it used with "paranormal" before.

Hm, interesting. Though I admit I'm not a fan of the cover (it took looking at her elbow to figure out if she was facing forward or backward...).

Anon, No "cozy" can't be put in front of any genre. For example, "cozy horror" just wouldn't make sense. You could argue for "cozy sci-fi", but it's makes more sense to say sci-fi for a woman's market. A cozy does have less sex and violence than it's other half (mysteries, paranormals) and doesn't have to have a happily ever after ending as in paranormal romance (it can, cannot, or remain ambiguous). Usually, it features a quirky female protagonist, youngish, middle aged, or older.

Vickie, this book sounds great and I love your Wednesday Reads posts because it gives us an in-depth look at what grabs you.

I miss the "first sentence" critique, though. Did you not include it because although you loved this book, it didn't particularly have a great first sentence?

P.S. I just learned yesterday that Blogger has added a comment thread feature (where you can REPLY to the comments). If you're interested (like I was), instead of using the pop-out comment window, choose "embedded" and voila! If not, ignore this post-script. ;)

First sentence critique has been added. I completely forgot, so thanks for reminding me!

Yay! That's an awesome opening. Thanks for adding it! :)

I'm sorry the "Reply" link is being all bajiggity on you. I'd keep it that way and see if the problem doesn't iron itself out in time...you know, like my dang profile pic that suddenly went MIA a week ago. *sigh*